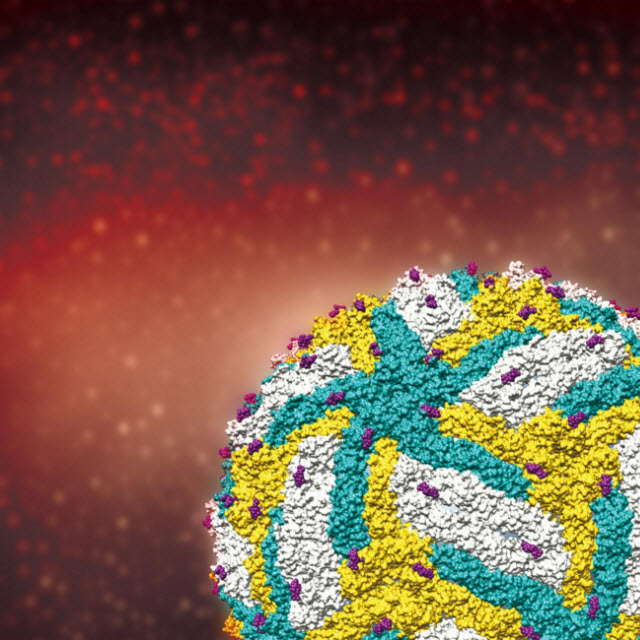 An important breakthrough in understanding the Zika virus structure and its behavior has been highlighted in a study by Duke-NUS Medical School (Duke-NUS) scientists.

Published online on 19 April 2016 in the journal Nature, their findings reveal the Zika virus structure and identify potential sites on the virus to target with therapeutics. This knowledge will help worldwide efforts to fight the poorly understood virus, which is currently a public health and research priority.

The high-resolution structure of the Zika virus showed that the overall virus architecture is similar to other flaviviruses such as the West Nile and dengue viruses. However, the team found that the Zika virus is more thermally stable than the dengue virus, and is also structurally stable even when incubated at 40 degrees Celsius, mimicking the body temperature of extremely feverish patients after virus infection.

The structure also revealed that the Zika virus surface proteins have tighter interactions compared to the dengue virus, therefore making it more stable than the dengue virus. This may explain its ability to survive in harsh conditions such as semen, saliva, and urine. In addition to transmission by the bite of an infected mosquito, the structural stability of the virus makes it more resilient, which likely explains its special ability to transmit through sexual contact. Similar viruses, such as dengue and West Nile, do not spread through sexual contact.

Overall, the findings suggest that antibodies or drugs that destabilize the structure of the Zika virus may help to reduce the severity of the disease or limit the spread of the virus.

"This is exciting, as our structure will provide important clues to other researchers around the world who are working to find therapeutic agents against the Zika virus," said Associate Prof Lok from the Emerging Infectious Diseases Programme at Duke-NUS.

"Additionally, we have shown that the Zika virus contains structures that are unique from the viruses in the same family that affect brains, such as the West Nile virus, and also those that cause fever, such as the dengue virus. These structures can be mutated to better understand how they influence the Zika virus infection in humans and can also potentially lead to the development of a safe vaccine that has reduced side effects."

The Zika virus, a mosquito-borne virus, is mainly transmitted to people through the bite of infected Aedes mosquitoes. It causes Zika virus disease which presents symptoms such as mild fever, skin rashes, conjunctivitis, muscle and joint pain, malaise, or headache in infected people.

In February 2016, the Zika virus was declared by the World Health Organization (WHO) to be a public health emergency of international concern. (1) This was a result of worldwide outbreaks of the virus starting in 2013 which have been associated with neurological disorders such as microcephaly in fetuses and Guillian-Barré syndrome in adults. (2)

(1) WHO statement on the first meeting of the International Health Regulations (2005) (IHR 2005) Emergency Committee on Zika virus and observed increase in neurological disorders and neonatal malformations. (2016, February 1). Retrieved April 13, 2016, from http://www.who.int/mediacentre/news/statements/2016/1st-emergency-committee-zika/en/