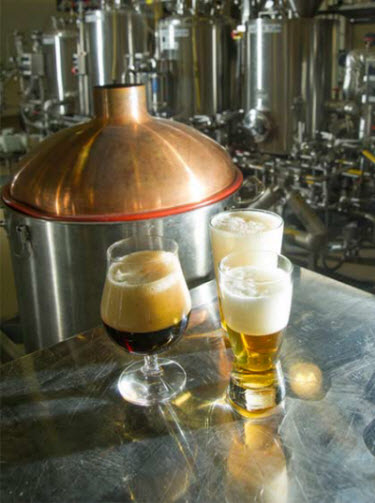 Carlos Alvarez of The Gambrinus Company is giving $1 million to enhance equipment in UC Davis? brewing science program.Photo credit: Karin Higgins/UC DavisThe gift will fund new brewing and laboratory equipment at the University of California, Davis to create the brewery of the future. The gift from Alvarez will build on previous investments and secure UC Davis’ position as a leader in brewing education.

Gambrinus is a leader in craft-brewing with three independent and distinctive breweries: the Trumer Brauerei in Berkeley, California; BridgePort Brewing Company in Portland, Oregon; and the Spoetzl Brewery in Shiner, Texas, which is home of the iconic Shiner Bock beer.

“As an immigrant from Mexico, I have enjoyed the many opportunities I found in this country,” Alvarez said, “and I’m very happy that success in the beer business enables me to help in UC Davis’ efforts to educate future craft brewers.”

Brewing education at UC Davis dates back to 1959 when the Lucky Lager Brewing Company of San Francisco donated a small brewery and launched a teaching program with the Master Brewers Association. As student interest grew, additional companies began supporting the program. In 2011 brewing science moved into the world-class facilities at the Robert Mondavi Institute for Wine and Food Science.

“This fantastic donation from Carlos Alvarez will allow us to develop our teaching and research capabilities in a way that surpasses anything I could have imagined when I first came to the university in 1999,” said Charlie Bamforth, Anheuser-Busch Endowed Professor of Malting and Brewing Sciences. “I salute Mr. Alvarez’s dedication to education and am thrilled of what we will deliver with his contribution.”

Alvarez is a graduate of the Monterrey Institute of Technology in Monterrey, Mexico, with a degree in biochemical engineering. As export manager for Grupo Modelo, he led the launch of Corona in the United States. In 1986 he founded The Gambrinus Company and became importer for Corona and the Modelo portfolio for the next 20 years, developing Corona into the No. 1 imported beer and a leading global brand.

Alvarez is deeply committed to education and has contributed to educational institutions across the United States, with a particular focus on scholarship funding. He also has provided generous support to the brewing program at Oregon State University.