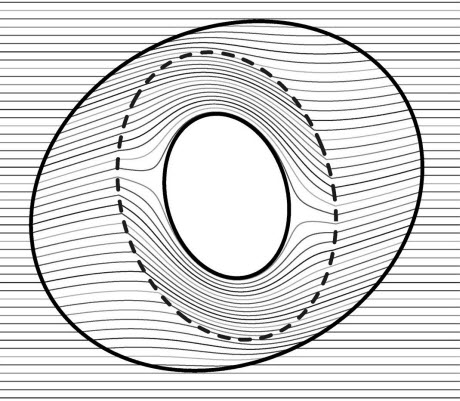 This image shows how different types of fluid could be combined to provide an acoustic cloak. It was motivated by the author's fondness for Easter eggs, especially large eggs with smaller ones inside.Image credit: Professor Andrew Norris/Rutgers University-New BrunswickUsing his own version of Harry Potter’s cloak of invisibility, Rutgers professor Andrew Norris can help make underwater objects appear invisible.

Norris, a distinguished professor in the Department of Mechanical and Aerospace Engineering at Rutgers University–New Brunswick, is developing honeycomb-like metallic structures that reroute sound waves to create the impression that both the cloak and anything beneath it are not there.

Rutgers Today asked Norris to discuss his pioneering research, which could lead to improved acoustic technology, including better imaging under water, and biomedical applications, such as better imaging of tissue.

Cloaking is sort of synonymous with invisibility, like when Harry Potter wears an invisible cloak. He puts it on and disappears. There are lots of sci-fi references to invisibility—the (comic book characters) Invisible Woman and the Invisible Man. They have cloaking devices in Star Trek. So, it’s always been of interest in literature, in society, and in science. During the last 20 years or so, people have realized it’s possible to achieve one kind of cloaking—the basic idea is to control sound waves in ways you couldn’t before.

What do you study?

We study acoustics—sound that can be in the air, fluids, and solids. Generally, we use mathematical models to explore possibilities for different kinds of devices and see how we might control sound. We often find things that we didn’t expect. We can make effects that might appear impossible, but everything is based on the laws of physics. Much of our work involves designing and testing innovative materials and structures to control how sound waves move.

What have been your major findings?

Our findings are in the field of cloaking. A cloak bends the light around an object so it is invisible. The same concepts apply to other kinds of waves, including sound. To make a cloak for sound or light, you must be able to make new forms of material that can bend the waves around the object inside the cloak. We are focusing on developing a new material design using metallic lattices. Our lattice consists of relatively thin metal pieces arranged in a honeycomb pattern if the structure is two-dimensional, and like a diamond structure in 3D. While these structures cannot yet make cloaking devices, we found they can be used in other unexpected applications, such as making underwater acoustic lenses. We designed a lens that focuses and amplifies sound. The lens is novel because no power is necessary and it can focus acoustic energy in a small region, magnifying the signal from a distant sound source. We also designed an underwater device that can redirect acoustic energy from a hydrophone. A hydrophone produces sound underwater, but the sound energy is directed almost equally in all directions.

Why are your findings important and what are the practical implications?

Acoustics is central in communications, whether the sound provides useful information or annoying noise. Our research has developed theoretical and practical methods to better understand how to control sound. Our focus is on applications for underwater sound, such as sonar sound waves used in communicating and locating things. The Navy has expressed interest. Everyone asks whether a cloak could make a submarine invisible, but that is quite unrealistic. The size of any effective cloak would dwarf the sub. We also could see applications in commercial devices. Examples would be improved acoustic imaging underwater for finding fish or imaging the ocean bottom. Biomedical applications could include better imaging of tissue, which is very much like water when it comes to acoustics.