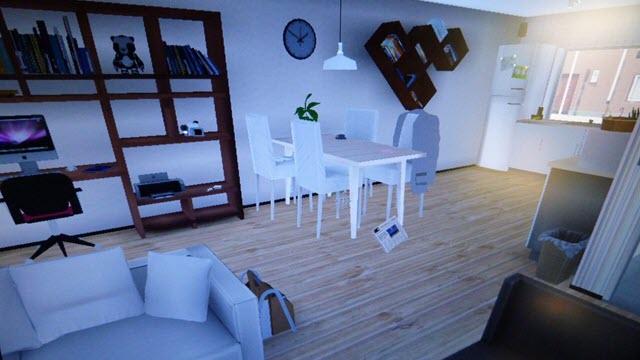 Interior of virtual reality house built for the burglars to steal fromCREDIT: University of Portsmouth

The expertise of experienced burglars puts them streets ahead of householders, and even well ahead of other criminals, according to a new study.

The results could lead to a step-change in how we fight this crime.

Dr. Claire Nee, of the University of Portsmouth, leading a team of international researchers from the Netherlands has pioneered the use of virtual environments to study crime.

In the first re-enactment of a burglary by experienced burglars, other criminals and those with no criminal experience, 160 people were asked to scout a virtual neighbourhood, choose a house to burgle, and burgle it.

The results revealed a striking degree of knowledge and skill by experienced burglars in choosing which home to target, how to navigate inside, and what to take, revealing unprecedented insight into crime prevention.

According to Dr. Nee, the two best ways to protect your home from burglary are to try and make it appear as if someone is at home, and try to not have hiding places for burglars in your garden or, if you do, to install security lighting.

Dr. Nee said: "This was the first study in the world to observe burglars as they scoped the neighborhood, and they covered significantly more ground in the same time as the other groups, appraising the rear of the properties and the ends of the terraces. Having entered their chosen property at the back, they quickly navigated upstairs to high value areas focussing on portable, expensive items such as jewelry, laptops, and tablets and wallets.

"They were also much more efficient than other criminals and non-criminals, who were far less discriminate in what they stole and spent more time in lower value areas on the ground floor.

"The results showed clear differences in the way burglars navigate and process information in the neighborhood, compared to other criminals and non-criminals, which we will use to advise homeowners, the police, and insurance companies in helping people protect themselves from crime."

"Understanding their expertise is key to protecting yourself from this kind of criminal," she said. "If we know experienced burglars tend to always do A and then B and then C, on their journey to crime and then inside the property, we can plan our environment and homes to disrupt the burglar, by not having a predictable layout or high value zones, for example."

In the study, 56 experienced burglars, 50 other criminals, and 55 non-criminals took part in a mock burglary in a virtual neighbourhood of terraced houses.

Each was encouraged to think aloud, telling researchers what was going through their minds as they first scoped the neighbourhood, then entered a house and clicked on things they'd steal.

They could stay in the house for as long as they wanted, and click on as many items as they liked.

One of the burglars said: "You look at what people live in, what people are driving, and you can work out what they may own, may have, what money they might have, what jewelry, whatever it might be, you can pretty much picture it in your head what could be inside a building, inside a garage, inside a cupboard."

Three quarters of burglars targeted the end of terrace house, choosing the back door to enter, while less than half of the other two groups chose this house, and even fewer chose to enter by the back door.

Burglars spent about nine minutes inside, spending nearly half their time on the first floor.

Non-experts were more chaotic, with no clear pattern in their behavior and chose larger heavier items such as TVs and PCs that would be difficult to escape with.

Discussing the time he spent in first floor bedrooms, one burglar said: "A jewelry box can have more money than an entire house."

Another said: "The first thing a burglar does is go upstairs and look for gold. You wanna look for small items, expensive items."

Burglars were twice as likely to find the three highest value items—a ring, passport, and necklace hidden in a jewelry box in a filing cabinet in the study.

Experienced burglars shunned the basic iPad, unlike others, preferring the upmarket version.

"For burglars it seems to be second nature to be aware how long they could spend in a house before any hidden alarms would bring police, and which rooms and areas in the house had the highest value, easiest to carry and easiest to sell items," Dr Nee said.

The researchers noted that the burglars and other criminal group expressed some unease while committing the mock crime, unlike the non-criminals, indicating that the virtual environment was successfully reinstating the experience of undertaking the burglary. The researchers were also surprised how forthcoming they were once within the virtual environment.

Dr. Nee said: "A considerable body of research tells us that an expert in any domain, from chess to medicine, processes information in their field in a way that is distinguishably different to a novice. Now we have incontrovertible evidence that this applies to experienced offenders as well.

"Criminals commonly dedicate themselves to a type of crime. An experienced burglar can quickly recognize in any house the layout, ease of access, degree of wealth and security. Once inside, they are quick to identify items that are high in value and easy to carry.

"Law-abiding people are notoriously poor at understanding burglary risk and the opportunities they leave for crime inside and outside their homes.

"We very much hope research like this helps them get inside the expert burglar's head, giving them much more chance of protecting their property."

The study was co-authored by professor Jean-Louis van Gelder at University of Twente, Dr. Marco Otte at Vrije University, Dr. Zarah Vernham and Ms Amy Meenaghan at University of Portsmouth. It is published in the journal Criminology.