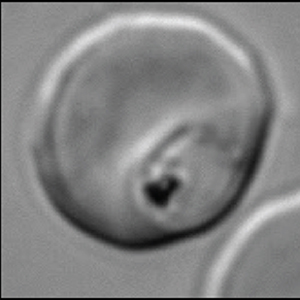 This human red blood cell is infected with a malaria parasite. Scientists have identified a new and unusual way to kill the parasite that involves the crime-scene compound called luminol.DANIEL GOLDBERG Luminol glows blue when it encounters the hemoglobin in red blood cells. And now, researchers at Washington University School of Medicine in St. Louis have shown that they can trick malaria-infected red blood cells into building up a volatile chemical stockpile that can be set off by luminol’s glow. To achieve this, the scientists gave infected red blood cells an unusual amino acid and used luminol’s glow to trigger the chemical, killing the parasite.

“The light that luminol emits is enhanced by the antimalarial drug artemisinin,” said senior author Daniel Goldberg, MD, PhD, professor of medicine and molecular microbiology. “We think these agents could be combined to form an innovative treatment for malaria.”

The results are available online in the journal eLife.

The World Health Organization (WHO) estimated that in 2013, malaria infected 198 million people and killed 584,000, the majority of whom were African children.

The new therapy would have an advantage over current malaria treatments, which have become less effective as the parasite mutates. WHO recommends that artemisinin — the most commonly used antimalarial drug— only be used in combination with other treatments because the parasite is becoming resistant to it.

The new approach targets proteins made by human red blood cells, which the parasite can’t mutate.

In the study, researchers led by first author Paul Sigala, PhD, a scientist in Goldberg’s laboratory, worked with human red blood cells infected with the malaria parasite. They wanted to better understand how the parasite gets hold of heme, the deep red, nonprotein part of hemoglobin that carries oxygen. Heme is essential to the parasite’s survival.

The malaria parasite opens an unnatural channel on the surface of red blood cells. When scientists put an ingredient of heme — an amino acid — into the solution containing the cells, the amino acid entered the cells through the channel and started the heme-making process.

The process led to a buildup of a molecule called protoporphyrin IX. When exposed to light, this molecule emits dangerous, chemically reactive compounds known as free radicals, killing the parasites.

The research team plans to test the approach in animal studies.

“All of these agents — the amino acid, the luminol and artemisinin — have been cleared for use in humans individually, so we are optimistic that they won’t present any safety problems together,” said Goldberg, who is co-director of the Division of Infectious Diseases. “This could be a promising new treatment for a devastating disease.”