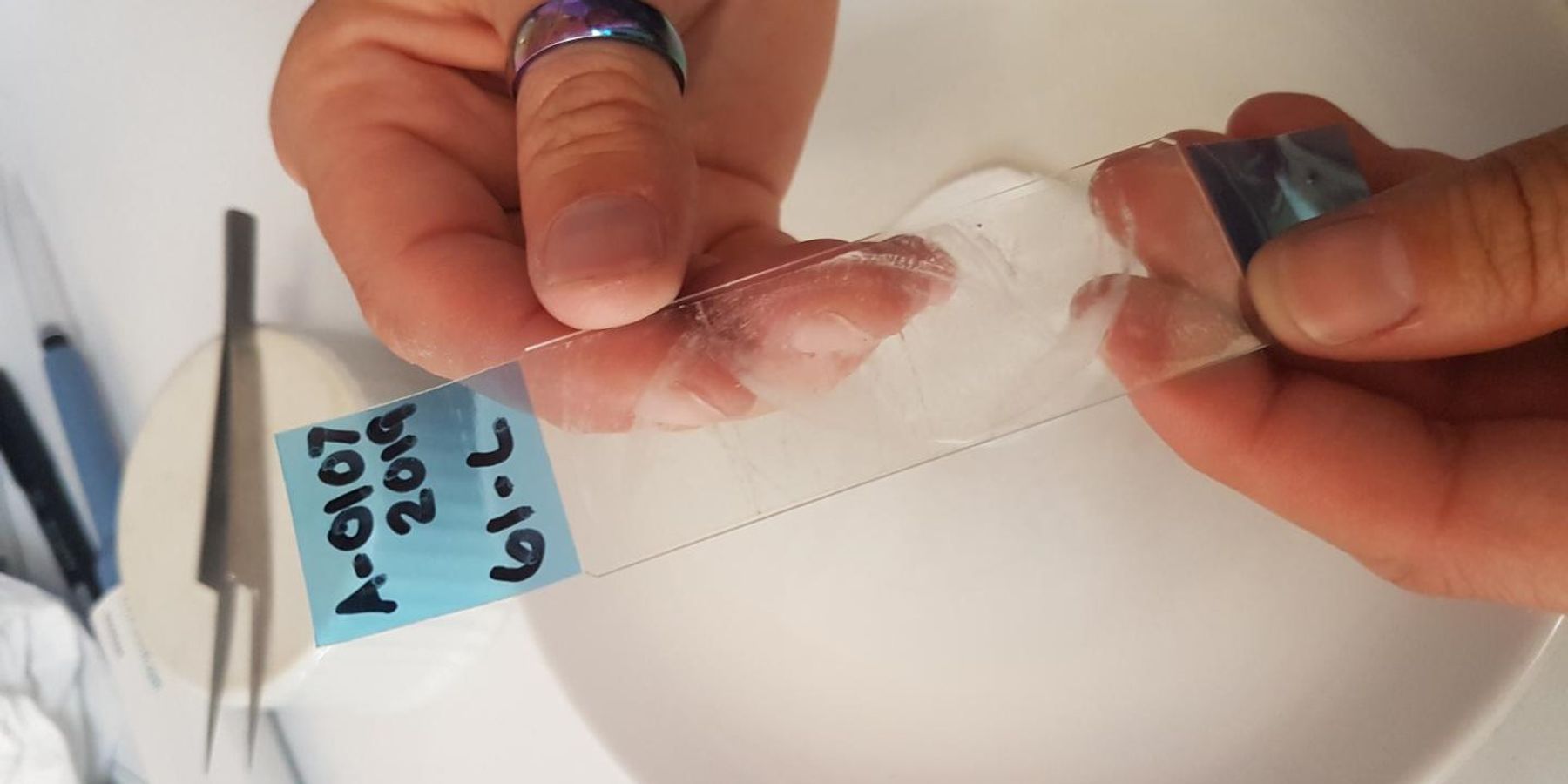 Easylift® tape being used onboard the American Promise during the Hudson River expedition.
Staffordshire University

An adhesive tape patented by Staffordshire University researchers to recover trace evidence from crimes scenes is being adopted to analyze microplastics more efficiently.

Man-made polymer particles or "microplastics" are proven to be present in land, air, and water environments. However, despite extensive global studies, there is no standardized approach for their collection and analysis.

Currently, studies regularly involve retrieving microplastic samples from water using a filtration method. Samples are commonly analyzed in situ on the filter or after removal from it by hand, which is time consuming and risks accidental loss of the particles and cross contamination.

Claire Gwinnett, professor of forensic and environmental science, is part of the team that created Easylift® tape more than a decade ago and has more recently applied her expertise in fiber analysis to microplastics.

She explained: “Easylift® tape was developed for the forensic market. However, what we have found is that the same benefits are true when looking at particulates from any environment.

We realized that it holds great potential for microplastics work particularly when you are out in the field, for example on a boat or on a beach, where the risk of losing or contaminating your microplastic samples is huge.”

The new paper, published in Environmental Advances, addresses the shortcomings of current research methods and sets out a new workflow using Easylift® tape. The technique uses the self-adhesive tape to "lift" microplastic particles from a filter then safely preserves them between the tape and a sheet of suitable material—in this case glass.

This method was trialed by Gwinnett during an expedition to collect microplastic samples along the Hudson River in New York with the Rozalia Project where it proved highly effective, with a mean fiber recovery rate of 96.4 percent. It also enables multiple analytical techniques to be applied to the samples afterwards and preserves them for future study.

Gwinnett said: “The ultimate goal is that this will become the standardized workflow for microplastics research across the world. At the moment, scientists are extrapolating data and it is only through constant monitoring that we will we truly know how much microplastic pollution is out there. If there is a standardized method to globally track microplastics then we can much better understand the risks and where we should be targeting our efforts for mitigation.

“We know plastic pollution is widespread, but we need to understand how much is in different locations, where it has come from and where it is going. What we need is a global collaborative effort to gather that large-scale data.”

Easylift® tape is already being employed more widely and was used to collect microplastic samples during a transatlantic sailing expedition on former racing vessel the SV Jolokia last year. The Marine Education Centre based in New York State is also training citizen scientists to take samples from the Hudson River and other locations using the tape.

Staffordshire University is now collaborating with the University of Oxford and Nekton Mission to analyze microplastic samples from an expedition to the Antarctic where these particulates will be retrieved from ice cores using Easylift® tape.

Gwinnett added: “We need the ability for people to constantly monitor plastic pollution without massive expertise and the beauty of Easylift® is that it can be used by anyone—volunteers, sailing crews, people working in waste-water management can all use this in a robust way. It will allow us to share microplastic samples with partner institutions across the world for further analysis and to validate research methods. As with evidence recovered from crime scenes, we will also be able to store microplastic samples to be re-examined in a decade’s time or longer. Being able to collaborate and share research in this way is an exciting step forward.”

- This press release was originally published on the Staffordshire University website