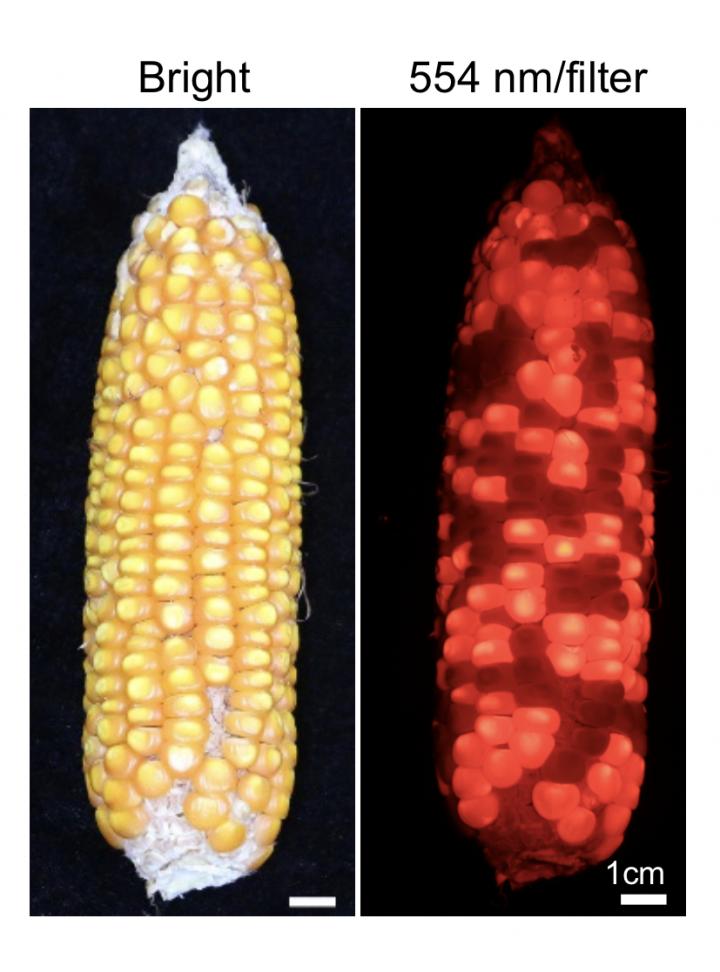 This image shows an ear of an MGM maintainer plant was photographed under a bright field (left panel) and under 554 nm wavelength excitation with a filter (right panel). The red fluorescent kernels (one example indicated by the blue arrow in the right panel) were MGM maintainer seeds The kernels that appear dark are the sterile seeds without MGM fluorescent marker (one example indicated by the white arrow in the right panel).
Chuanxiao Xie

Crop hybrid technologies have contributed to the significant yield improvement worldwide in the past decades. However, designing and maintaining a hybrid production line has always been complex and laborious. Now, researchers in China have developed a new system combining CRISPR-mediated genome editing with other approaches that could produce better seeds compared with conventional hybrid methods and shorten the production timeline by five to 10 years. The study was published July 8 in the journal Molecular Plant.

Hybrids are preferred over purebreds in crop production. Crossing two genetically distant plant varieties often gives rise to progeny with superior traits compared with the parents. The offspring tend to have higher yields and better disease tolerance. This phenomenon is called heterosis, or hybrid vigor.

For example, the first step to produce a hybrid is to find or make a type of parent plant carrying a mutation, so that it does not produce viable pollen. This is to avoid self-crossing and ensure most of the parent plants become fertilized by a different variety. But the progeny needs to be fertile in order to self-cross to produce more of itself and plants to be used as the parent. Scientists would cross the sterile plant with another that is genetically fertile to restore the plant's sterility and make hybrid seeds. Constructing a production cycle like this is vital in building an efficient seed production line in the field.

These approaches have very specific requirements of plants' genotypes, and establishing stable infertile and fertile breeds can take years.

"These limitations have restricted them from being applied more widely in commercial agriculture," Xie says. "But our new system using CRISPR/Cas9 can significantly streamline the process. Now, one single transformation is enough."

Xie and his colleagues first constructed a Cas9 vector that targets MS26, a fertility gene in maize. They also prepared a second vector, called MGM. The first vector works by cutting out a segment of the MS26, which would make the plant genetically infertile. The MGM vector carries three functional parts: a working MS26 gene coding sequence to restore fertility, an enzyme to inactive pollen, and a red color marker that would show in seeds.

This chart summarizes the workflow of the next-generation hybrid seed production in industrial practices.
Chuanxiao Xie

The team introduced both vectors into an agrobacterium and used it to transform maize embryos. Because maize is diploid—meaning it has two copies of each gene—these edited embryos would carry two copies of mutated MS26, in addition to a single copy of MGM gene that was introduced.

When these plants self-crossed, they produce two types of offspring with a 1 to 1 ratio according to the rule of meiosis: one with a mutated MS26 and MGM, and one with mutated MS26 without MGM.

The MGM-absent progeny is infertile, so it can be used as a parent for hybrid seed production. Because these parents do not have carry the exogenous MGM gene, their offspring--if crossed with a non-genetically engineered variety—are not transgenic.

The other half of the offspring carries the MGM and MGM-present offspring are fertile, and essentially the same as their parents. These plants—called the maintainers—can be self-crossed to make more infertile plants to produce hybrids and more maintainers.

The maintainers also carry a red fluorescent marker expressed from the MGM vector, so they can be easily distinguished and sorted from the sterile seeds.

"Our system significantly reduces the resources needed to construct stable hybrid seed production lines. So the inputs and costs of seeds would be much lower," Xie says.

Besides maize, many other major crops also have MS26, including rice, millet, wheat, and sorghum. Therefore, the new approach can be readily applied to other crops, or even other fertility-determining genes in crops, he adds.

"Technology-wise, we are not far from large-scale applications. But there is a procedure we need to go through before getting approved for commercial production," Xie says.