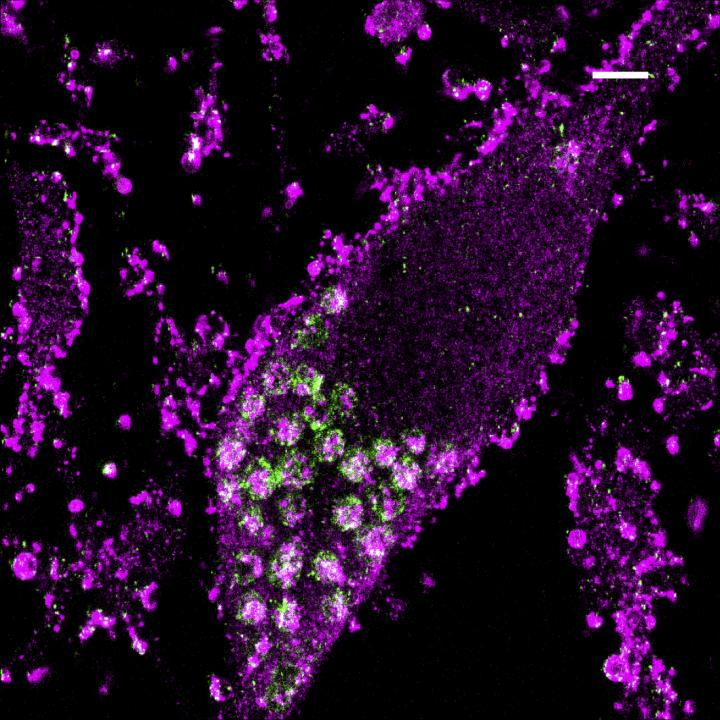 Super-resolution microscopy of a neuron shows the accumulation of lipids within lysosomes that occurs when the gene for prosaposin is suppressed.
UCSF

When a single gene in a cell is turned on or off, its resulting presence or absence can affect the function and survival of the cell. In a new study appearing May 24 in Nature Neuroscience, University of California, San Francisco (UCSF) researchers have successfully catalogued this effect in the human neuron by separately toggling each of the 20,000 genes in the human genome.

In doing so, they've created a technique that can be employed for many different cell types, as well as a database where other researchers using the new technique can contribute similar knowledge, creating a picture of gene function in disease across the entire spectrum of human cells.

"This is the key next step in uncovering the mechanisms behind disease genes," said Martin Kampmann, PhD, associate professor, Institute for Neurodegenerative Diseases and the UCSF Weill Institute for Neurosciences, noting that the work leverages recent advances in gene sequencing, stem cell technology, and CRISPR.

"There are lots of human genetics studies linking specific genes to specific diseases," Kampmann said. "The work we're doing can provide insight into how changes in these genes lead to disease and allow us to target them with treatments."

His team was interested in pinpointing genes that might be involved in neurodegenerative diseases such as Alzheimer's and related forms of dementia. Their approach included using stem-cell-generated human neurons and identifying chemical changes that occur in the cell when individual genes are turned on and off.

They were looking specifically for downstream changes in gene expression that would produce oxidative stress in the cell, a circumstance in which highly reactive forms of oxygen can create a toxic environment. Such conditions are thought to contribute to neurodegeneration.

To survey individual genes and learn more about their functions, Kampmann employed a technique called CRISPR activation/interference, or CRISPR a/i, which he co-developed as a UCSF post-doctoral scholar working on cancer cells with Jonathan Weissman, PhD, a former UCSF faculty member and current Whitehead Institute member and investigator with the Howard Hughes Medical Institute. CRISPR a/i allows a researcher to temporarily turn a single gene off or on and see how that change affects the expression of other genes.

Using this tool on the human neuron, Kampmann turned one gene after another on and off, using a dye to visualize the presence of highly reactive oxygen. Among the most interesting of his findings was that switching off the gene for a protein called prosaposin, which normally assists with the cell's recycling of waste products, greatly increased the levels of oxidative stress.

In neurons, prosaposin is associated with a part of the cell called the lysosome, where biological molecules and toxins are sorted through and dealt with in a variety of ways. "At first glance, prosaposin should have nothing to do with oxidative molecules. It caught our attention because this gene had recently been linked to Parkinson's disease," Kampmann said. "What was really exciting was that now, with the results from this CRISPR screen, we had a cell-based model to help us understand what's behind that linkage."

The team then embarked on what Kampmann called a "detective story" to find out how the lack of prosaposin is linked to neurodegeneration. The researchers found that suppression of the gene led to buildup of a substance called age pigment, which has been seen in aging cells whose lysosomes no longer degrade material as efficiently. The researchers discovered that age pigment trapped iron, generating reactive oxygen molecules that triggered ferroptosis, an iron-dependent process that leads to cell death.

"By simply inactivating a single gene," Kampmann said, "in only days we could generate a hallmark of aging that would normally take decades to develop in the human body."

Kampmann's genetic screen is the first of its kind performed on human neurons.

The cascade of changes he observed are specific to the function of neurons and are related to just one set of conditions. He said the results make a case for using CRISPR a/i to perform similar screens looking for changes that prompt other kinds of disease-related environments in neurons and other types of differentiated cells.

To that end, Kampmann has created an open-access database called CRISPRbrain, where he and other scientists can share and study large-scale data sets like the ones generated by his genetic screens. Applying advanced computational technology such as machine learning can then detect patterns in this sea of data.

"By becoming the data commons for screens of many different cell types from many different labs and in different disease contexts, we can achieve a critical mass of information," he said. "There's enormous power in aggregating and cross-analyzing all of this."

The team's next step is to perform similar screens on neurons made from stem cells derived from patients with mutations known to contribute to neurodegeneration, as well as look at other cells such as astrocytes and microglia that play roles in brain disease.

Kampmann's hope is that the technology and database are widely adopted. "Now that we can do this in a systematic way, we can really interpret the underlying processes of how genes contribute to disease and find pathways to treat those conditions."

- This press release was originally published on the UCSF website. It has been edited for style