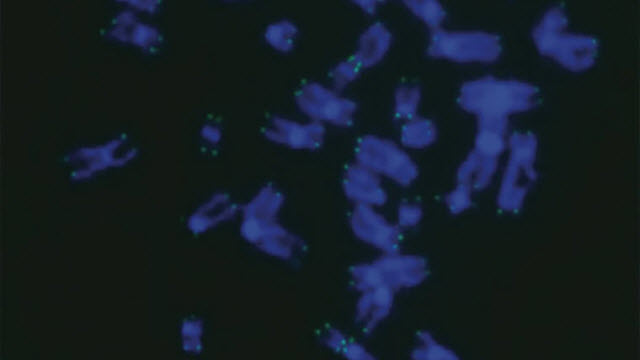 Chromosomes (blue) have protective end caps called telomeres that help them maintain stability. In this image, the telomeres (green) are abnormally short, which leads to DNA damage that accrues over time. Using the gene editing technology CRISPR, scientists at Washington University School of Medicine in St. Louis have shed light on a rare syndrome that causes children to lose the ability to manufacture vital blood cells. The syndrome, dyskeratosis congenita, is characterized by shortened telomeres.Image credit: Marequet Minor

The research, at Washington University School of Medicine in St. Louis, suggests new lines of investigation into how to treat this condition—dyskeratosis congenita—which is characterized by shortened telomeres. Telomeres, the protective caps on the ends of chromosomes, help maintain DNA stability. Short telomeres lead to progressive DNA damage that accumulates over time.

The study appears July 27 in the journal Stem Cell Reports.

“Lengthening telomeres seems like a logical way to help these patients, but it could possibly come with its own set of problems,” said senior author Luis F.Z. Batista, PhD, an assistant professor of medicine. “We would worry about encouraging cancer formation, for example, as high levels of the protein that lengthens telomeres—telomerase—are commonly found with cancer. But if we could find a way to block the signaling pathways that short telomeres activate—that specifically lead to the problems in blood cell formation—it could allow these patients to continue making blood cells.”

Children with dyskeratosis congenita experience progressive bone marrow failure, eventually losing the ability to make red blood cells, white blood cells, and platelets. They are also at high risk of leukemia. Severity of the condition varies widely, but those with severe forms often die of bone marrow failure in young adulthood. The damage of short telomeres is most apparent in rapidly dividing cell types, such as those in the skin, nail beds, mucous membranes, and blood. Early signs of the disease include misshapen fingernails, abnormal skin pigmentation, and white patches in the mouth.

Because the disease is challenging to study in mice—as mice deficient in telomerase don’t fully experience bone marrow failure—the researchers used CRISPR to edit into human embryonic stem cells two mutations associated with the disease. The researchers then showed that these cells reproduced the telomere-shortening defect seen in patients with the disorder. Batista and co-senior author Christopher M. Sturgeon, assistant professor of medicine, observed that these methods represent a novel and accurate human model of the disorder.

With this model, the scientists further showed how the telomere defect leads to the gradual loss of blood cell formation from human embryonic stem cells and, importantly, how blocking the downstream effects of the defect can reverse this loss, leading to normal production of blood cells. Blocking this signaling pathway did not lengthen telomeres or stop their shortening, but allowed the manufacturing of different types of blood cells to continue, according to the study.

The researchers also teased out an important nuance in the detrimental effect of short telomeres during early development. Using an approach that mimics early embryonic development, they found that the defect did not prevent the formation and function of blood cells produced during the first month of gestation that allow an embryo to fuel its rapidly growing oxygen needs. Rather, the defect arrested the production of adult-like blood cell progenitors, such as red blood cells that carry oxygen or white blood cells that fight infection.

“This was tremendously interesting from a developmental biology perspective as well as from a disease modeling perspective,” Sturgeon said. “We now have a platform to really dig deeper into understanding the mechanisms behind some forms of bone marrow failure.”

Interestingly, the researchers implicated high levels of a protein called p53 as one of the signals that leads to the drop in adult-like blood cell formation. The p53 protein is usually considered protective of DNA.

“P53 is thought of as a guardian of the genome,” Batista said. “Mutations that disable p53 are associated with different types of cancer. Because of this we would not consider directly trying to block p53 in these patients. But what this study provides is proof-of-concept that this pathway is involved in this response. So we now are looking for ways to block the pathway further downstream without necessarily blocking p53 directly.”

Batista and Sturgeon recently received a grant from the Department of Defense to investigate these pathways. The strategy used in this study could be relevant for other bone marrow failure syndromes, such as Fanconi anemia and aplastic anemia, which also involve DNA damage accrual caused by different mutations.