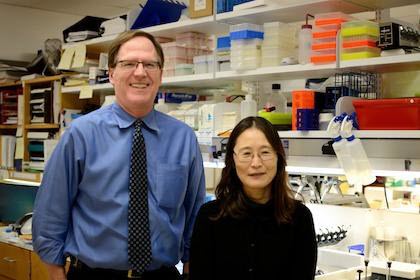 Researchers found that in obesity, insulin released into the blood by the pancreas is unable to pass through the cells that form the inner lining of blood vessels. As a result, insulin is not delivered to the muscles, where it usually stimulates most of the body's glucose to be metabolized. Blood glucose levels rise, leading to diabetes and its related cardiovascular, kidney, and vision problems, said Dr. Philip Shaul, director of the Center for Pulmonary and Vascular Biology in the Department of Pediatrics at UT Southwestern.

"It was totally unpredicted that a major problem in obesity is the delivery of circulating insulin to your muscle.  It was even more surprising that this problem involves immunoglobulins, which are the proteins that make up circulating antibodies," said Dr. Chieko Mineo, associate professor of pediatrics, who is a co-senior author on the report with Dr. Shaul.

The researchers found that obese mice have an unexpected chemical change in their immunoglobulins. "The abnormal immunoglobulins then act on cells lining blood vessels to inhibit an enzyme needed to transfer insulin from the bloodstream into the muscle," said Dr. Shaul, who holds the Associates First Capital Corporation Distinguished Chair in Pediatrics. "Type 2 diabetes patients have the same chemical change, and if we give a mouse immunoglobulins from a type 2 diabetic individual, the mouse becomes diabetic."

The findings reported in The Journal of Clinical Investigation may lead to new tools for diabetes risk screening and new avenues for diabetes prevention or treatment. The researchers identified an agent that they could administer to mice that prevents the chemical change in immunoglobulins that occurs with obesity and preserves healthy glucose status.  The researchers plan to test this strategy in humans in the near future.