Soil pathogen testing—critical to farming, but painstakingly slow and expensive—will soon be done accurately, quickly, inexpensively, and onsite, thanks to research that Washington State University scientists plant pathologists are sharing.

As the name implies, these tests detect disease-causing pathogens in the soil that can severely devastate crops. 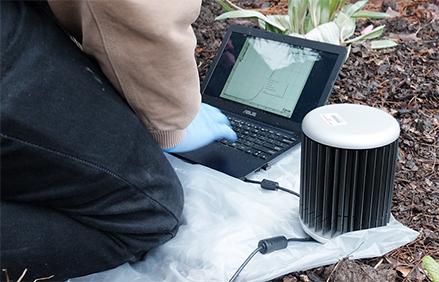 Until now, the tests have required large, expensive equipment or lab tests that take weeks.

The soil pathogen analysis process is based on polymerase chain reaction (PCR) tests that are very specific and sensitive and only possible in a laboratory.

The new methods, designed by WSU plant pathologists, are not only portable and fast, but utilize testing materials easily available to the public. A paper by the researchers lists all the equipment and materials required to construct the device, plus instructions on how to put it all together and conduct soil tests.

"We've heard from many growers that the time it takes to obtain results from soil samples sent to a lab is too long," said Kiwamu Tanaka, assistant professor in WSU's Department of Plant Pathology. "The results come back too late to be helpful. But if they can get results on site, they could make informed decisions about treatments or management changes before they even plant their crop."

Some diseases from soil pathogens may not be visible until weeks after the crop has sprouted, Tanaka said. That could be too late to treat the disease or could force farmers to use more treatments.

WSU graduate student Joseph DeShields, a first author on the paper, said it took about six months of work to get their device to work in the field. It relies on magnets to capture pathogens' DNA from the soil.

"It turns out, it's really hard to separate and purify genetic material from soil because soil contains so much material for PCR tests," said DeShields "So we were thrilled when we made that breakthrough."

Rachel Bomberger is a WSU plant diagnostician who helped with the concepts of the machine testing. She said she's impressed by what Tanaka and the team accomplished.

"We removed a huge stumbling block when it comes to soil testing," said Bomberger, one of the co-authors on the paper. "We found the missing piece that makes the testing systems work in the field without expensive lab equipment or testing materials."

The system was tested on potato fields around eastern Washington, Tanaka said, but it will work on soil anywhere in the world.

"It's a really versatile method," he said. "You could use it for nationwide pathogen mapping or look at the distribution of pathogens around the country. We started small, but this could have huge implications for testing soil health and disease."

Tanaka said it was important for this discovery to be available in an open-access video journal.

"We're always concerned about helping every grower and the industry as a whole," Tanaka said. "We want everybody to look at this and use it, if they think they'll benefit from it."