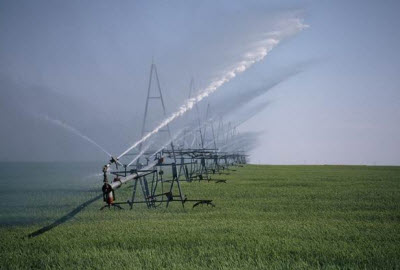 Competition for agricultural land and other climate mitigation factors could lead to more people going hungry.Photo credit: Paulkondratuk3194, Wikimedia CommonsAs many of the world's nations prepare and implement plans to cut greenhouse gas emissions, researchers say another critical factor needs to be considered. A new study has found for the first time that efforts to keep global temperatures in check will likely lead to more people going hungry. That risk, they say in the American Chemical Society journal Environmental Science & Technology, doesn't negate the need for mitigation but highlights the importance of comprehensive policies.

Previous studies have shown that climate change reduces how much food farms can produce, which could lead to more people suffering from hunger. Curbing the greenhouse gas emissions that lead to climate change can help maintain the yields of existing crops. But there might be indirect ways in which cutting emissions could actually put more people at risk of going hungry. For example, some grasses and other vegetation used for biofuels require agricultural land that might otherwise be used for food production. So, increased biofuel consumption could negatively affect the food supply. Also, the high cost of low-emissions technologies such as carbon capture and storage will be borne by consumers, who will then have less money to spend on food. Tomoko Hasegawa and colleagues wanted to get a better idea of how these pieces fit together.

The researchers used multiple models to determine the effects of strict emissions cuts and found that many more people would be at risk of hunger than if those cuts weren't in place. The team concludes that governments will have to take measures, such as increasing food aid, as they address climate change.

The authors acknowledge funding from the Japanese Ministry of the Environment and the National Institute for Environmental Studies in Japan.