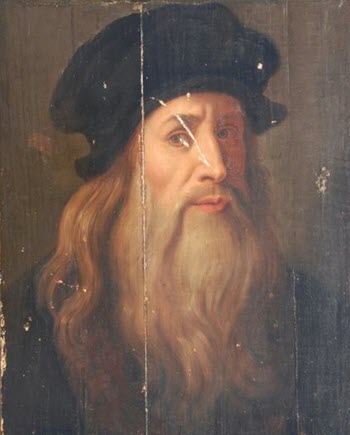 A fainting episode causing traumatic nerve damage affecting his right hand could be why Leonardo da Vinci's painting skills were hampered in his late career. While the impairment affected his ability to hold palettes and brushes to paint with his right hand, he was able to continue teaching and drawing with his left hand. According to most authors, the origin of da Vinci's right hand palsy was related to a stroke.

Doctors writing in the Journal of the Royal Society of Medicine reached a different conclusion after analyzing a 16th-century drawing of an elderly da Vinci, together with a biography and an engraving of the Renaissance polymath artist and inventor in earlier years.

The authors, Dr. Davide Lazzeri, a specialist in plastic reconstructive and aesthetic surgery at the Villa Salaria Clinic in Rome, and Dr. Carlo Rossi, a specialist in neurology at the Hospital of Pontedera, focused on a portrait of da Vinci drawn with red chalk attributed to 16th-century Lombard artist Giovan Ambrogio Figino. The drawing is a rare rendering of da Vinci's right arm in folds of clothing as if it was a bandage, with his right hand suspended in a stiff, contracted position.

Dr. Lazzeri said: Rather than depicting the typical clenched hand seen in post-stroke muscular spasticity, the picture suggests an alternative diagnosis such as ulnar palsy, commonly known as claw hand."

He suggests that a syncope, or faint, is more likely to have taken place than a stroke, during which da Vinci might have sustained acute trauma of his right upper limb, developing ulnar palsy. The ulnar nerve runs from the shoulder to little finger and manages almost all the intrinsic hand muscles that allow fine motor movements.

While an acute cardiovascular event may have been the cause of da Vinci's death, his hand impairment was not associated with cognitive decline or further motor impairment, meaning a stroke was unlikely. Dr. Lazzeri said: "This may explain why he left numerous paintings incomplete, including the Mona Lisa, during the last five years of his career as a painter while he continued teaching and drawing."