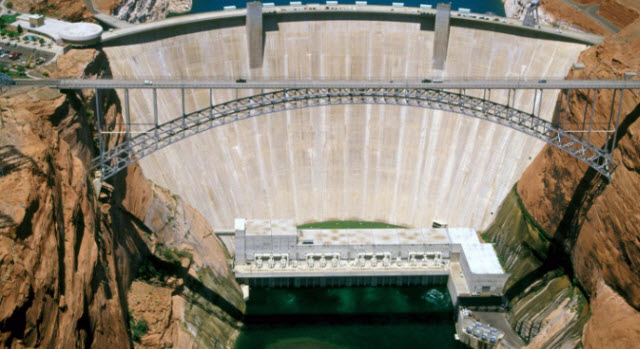 (Logan, UT)—Dams around the world provide critical water supplies and hydropower to growing communities and hundreds of new dams are proposed for developing economies. Though viewed as sources of potential green energy, their construction also poses a significant environmental cost.

New research conducted at Glen Canyon Dam on the U.S. Colorado River offers insights into ways to temper detrimental effects of dams, including a proposed management technique to mitigate the impacts of a common hydropower practice called "hydropeaking" that affects river food webs.

Schmidt and colleague LeRoy Poff of Colorado State University discuss findings, within the context of global pressure to build new dams, in a "Perspectives" paper published Sept. 8, 2016, in Science.

Hydropeaking, he says, is a practice used to increase river flows from hydroelectric dams during periods of peak demand by electricity consumers.

"Hydropeaking creates a fluctuating daily pattern of water flows that can severely impair productive shoreline habitats through repeated wetting and drying," Schmidt says. "A conundrum for river scientists and managers is how to counter these negative effects in a cost-effective manner."

Organisms particularly vulnerable to hydropeaking are aquatic insects, vital strands of the river food web, which lay their eggs near shorelines.

"Managers have to meet customer demand so total elimination of hydropeaking isn't an option," Schmidt says. "However, we assert that even small adjustments to river flow regimes might help to restore river ecosystems."

He and Poff summarize recent studies that illustrate how some small changes in dam operations can have big effects downstream. For instance, the recent study on the Colorado River downstream from Glen Canyon Dam, conducted by the USFS GCMRC, suggests "giving aquatic insects the weekend off."

"Eliminating hydropeaking during these two days of the week may allow insects some recovery time," he says. "It might re-establish a more natural food web and thereby benefit fish in the Grand Canyon ecosystem."

Restorative efforts at existing dams can only do so much, however. Schmidt and Poff recommend proposed dam construction in southeast Asia, South America and Africa be preceded by cautious strategic planning regarding the number of dams, as well as their location, design and how they will be operated.

"Although hydroelectricity is renewable energy, hydropower is not necessarily 'green' unless dams are located and operated in a carefully considered way," Schmidt says.

"In a world of growing demand for water and energy, we face an increasingly uncertain hydrological future," he says. "We have to balance economic gain against environmental degradation."