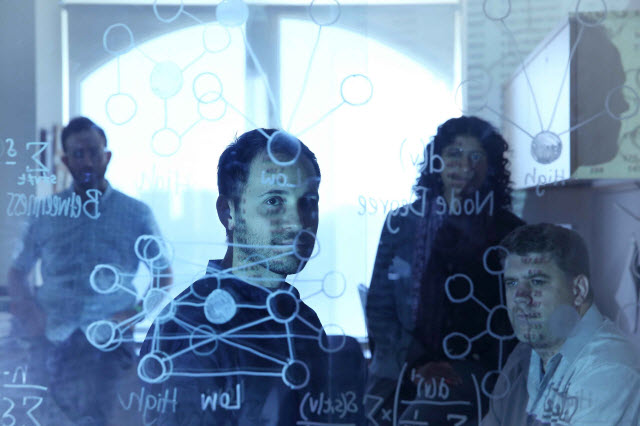 Safe when taken on their own, some prescription drugs become deadly when combined. Many of these interactions are well known, but others remain hidden to doctors, drug companies, and patients. Identifying these risky combinations has become a priority as the number of Americans on multiple medications rises.

Leveraging the power of big data, the researchers found a way to expand and improve the search for drug interactions. Mining a government database of reported drug side effects and a university hospital archive of patient records, they discovered eight pairs of drugs that are associated with a higher risk of a potentially deadly heart condition. Testing one of the pairs on individual heart cells in the lab, they discovered why the drug combination may disrupt the heart’s normal electrical activity in some patients.

The pair they studied—ceftriaxone, an antibiotic sold under the brand name Rocephin, and lansoprazole, a heartburn medication sold as Prevacid—are widely prescribed, and alone carry no known heart-related risks. But together, they may increase the chance that patients develop a heart condition known as long QT syndrome, which can cause abnormal heart rhythms and, in rare cases, sudden death. The study finds that patients taking ceftriaxone and lansoprazole together were 1.4 times more likely to have a prolonged QT interval than people who were taking either of these drugs alone.

“What’s most surprising is that you can go from a database of billions of data points to making a prediction that two molecules together can change the functions of a protein in a single heart cell,” said the study’s senior author, Nicholas Tatonetti, PhD, assistant professor of biomedical informatics at Columbia University Medical Center and a member of Columbia’s Data Science Institute. “It means these algorithms are really useful in medical research.”

An unusual collaboration sparked the investigation. A journalist with The Chicago Tribunecontacted Tatonetti about his previous work in developing algorithms to uncover dangerous drug interactions. At the time, Tatonetti was focused on diabetes and finding drug combinations that raised blood sugar but was frustrated by a lack of interest in his work. The journalist, Sam Roe, had an idea. What if Tatonetti shifted his search to identifying potentially fatal heart drug interactions? That might make more people pay attention.

Roe introduced Tatonetti to Raymond Woosley, MD, PhD, a national expert on drug-induced long QT syndrome whose earlier work led to the removal of a dangerous allergy medication from the market.  Woosley gave Tatonetti a list of drugs known to cause QT prolongation, which Tatonetti used to write an algorithm to search the U.S. Food and Drug Administration’s drug-side effect database for drug pairs matching a constellation of side effects associated with QT prolongation.

Looking at side effects alone, the algorithm turned up hundreds of suspect drug pairs. To narrow the search, the researchers turned to a Columbia database of patient records to see if the drug pairs produced measurable effects on the heart. Consulting the electrocardiograms of those in the database, they found the QT prolongation signal with several dozen drug pairs.

For further validation, Woosley introduced Tatonetti to a colleague, Robert Kass, PhD, the chair of Columbia’s Department of Pharmacology who also has a research interest in drugs affecting heart rhythm. Of the four pairs with the largest effect, the researchers tested the most widely used combination first: ceftriaxone and lansoprazole.

As anticipated, neither drug on its own had an effect on an electrical pathway called the hERG channel, which helps the heart maintain a normal rhythm. When combined, however, they found that the drugs blocked the channel’s electrical signal responsible for maintaining a normal QT interval.

The researchers have informed the FDA and the companies that discovered the drugs, Roche for ceftriaxone, and Takeda for lansoprazole, of their findings and are moving ahead to test the other three pairs of drugs.

Drug safety advocates are also excited. The study may provide the most convincing evidence yet that data science tools can ferret out meaningful signals in oceans of data. “Drug interactions occur often, but they often go unrecognized, and we have needed better methods of detection,” said study coauthor Woosley, founding president of ACZERT, an Arizona nonprofit organization focused on drug safety. “Nick’s techniques open up new avenues of data exploration for medical researchers.”

In an editorial published in the same issue of the journal, Dan Roden, MD, of Vanderbilt University Medical Center cautioned that the findings were not yet conclusive enough for doctors to advise all patients, or even patients at risk for QT prolongation, to avoid the drug pair. But he expressed support for the approach, and recommended the authors consider conducting a small clinical trial to confirm the interaction.

“Three independent lines of evidence show us that this is a signal worth paying attention to,” said the study’s lead author Tal Lorberbaum, a graduate student at Columbia. “We hope that a clinical trial will confirm that this is an actionable discovery.”