Each time Sharon DeWitte takes a 3-foot by 1-foot archival box off the shelf at the Museum of London she hopes it will be heavy.

“Heavy means you know you have a relatively complete skeleton,” said DeWitte, an anthropologist at the University of South Carolina who has spent summers examining hundreds of Medieval skeletons, each time shedding new light on the dark subject of the Black Death.

Since 2003, DeWitte has been studying the medieval mass killer that wiped out 30 percent of Europeans and nearly half of Londoners from 1347–1351. She is among a small group of scientists devoted to decoding the ancient plague and the person researchers turn to for providing evidence from skeletal remains.

Her findings may provide clues about the effects of disease on human evolution.

“It can tell us something about the nature of human variation today and whether there is an artifact of diseases we have faced in the past. Knowing how strongly these diseases can actually shape human biology can give us tools to work with in the future to understand disease and how it might affect us,” she said.

Having previously analyzed more than 600 skeletons of people who died during and after the Black Death, DeWitte turned her attention this summer to studying the remains of some 300 people who lived in the 11th and 12th centuries before the Black Death. Comparing the life span of people who lived before and after the blight, she expected to see a post-Black Death population that lived longer. The more complete the skeletons she studies, the more information she has about the people and their health at the time they died.

“I found that a significantly higher number of people were living to really old ages after the Black Death. Many people lived beyond the age of 50 and particularly above the age of 70,” DeWitte said. “I honestly was surprised by how dramatic the difference was in their survival. I’ve analyzed risks of mortality within the pre-and post-Black Death populations, and the preliminary results suggest lower overall risks of mortality after the Black Death.”

DeWitte attributes the longevity of the population to two things: The Black Death’s selectivity in targeting people who were frail and in poor health and a rise in living standards after the Black Death that resulted in better diet and improved housing.

“We see this pattern in modern populations. With improvements in diet, medical care and hygiene, you tend to see decreases in death from infectious disease,” DeWitte said. “Many people who survived the Black Death did so because they were basically healthier and their descendants were probably healthier. Because so many people died from the Black Death, wages increased for the people who survived. People of all social classes were eating better food, which would have had strong effects on health.”

DeWitte, an assistant professor in USC’s College of Arts and Sciences, spent five weeks in London gathering data, checking out 12 to 16 boxes each day from the museum’s holdings. In each box, under a thin layer of foam, are parts of a skeleton arranged in separate and clear bags and marked with a cemetery code, burial number and excavation date.

“I look for the parts of the skeleton that are going to tell me about age at death and sex, and then I look for a suite of skeletal stress markers that give me a general idea of how healthy people were,” DeWitte said.

DeWitte says where the two halves of the pelvis meet in the front and join in the rear provide consistent signs of adult aging. For children, teeth and the fusing of certain bones are among the best indicators of age. To determine sex, she looks for a wider pelvis in women and a squared jaw and skull made rugged along the forehead and back by testosterone in men.

A trio of skeletal markers provides DeWitte with clues about general health.

She looks for porous lesions that form on the top inside of the eye socket and the top of the skull. The sponge-like appearance of the lesion indicates diseases such as anemia, the result of a common response by the body to redirect iron sources when fighting infection, or scurvy.

She also examines for linear enamel hypoplasia, or little horizontal grooves that form on the teeth of children whose enamel formation was interrupted by malnutrition or infectious disease. Visible to the naked eye, these defects remain through adulthood and tell DeWitte the ages of when the health disturbances would have occurred.

“These markers are an indication of stress to the body’s health,” she said.

DeWitte’s research in London this summer was funded by grants from the Wenner-Gren Foundation and the American Association for Physical Anthropologists. After collecting the data, she headed to Santa Fe, N.M., for a residential fellowship at the School for Advanced Research to analyze it.

She said she plans to return to London next summer to investigate skeletons excavated from London’s Spitalfields cemetery, which was excavated in the 1990s and includes mass graves.

This year she also will begin collaborating with DNA experts at McMaster University in Hamilton, Ontario to look at human genetic variation before and after the Black Death.

“The survivors were either tremendously lucky or there was something about them that made them better able to resist the Black Death or mount a really strong immune response to disease,” DeWitte said. 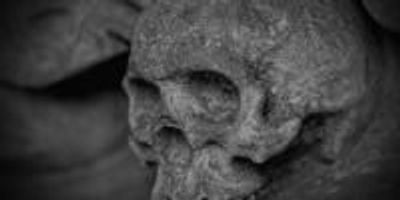