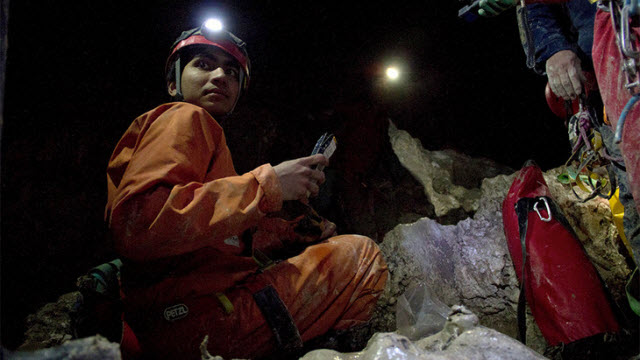 Muammar Mansor, who conducted research on Italy’s Frasassi Cave while earning his PhD at Penn State, analyzed gypsum found in the cave to detect the presence of microbes there. This blueprint for identifying life can be applied to other planets, Penn State researchers said.Photo credit: Zena Cardman

What can a massive cave in Italy tell us about life on Mars and other planets? According to new research by Penn State scientists, a whole lot.

In work published in Astrobiology, Penn State researchers identified biosignatures—or signs of the presence of life—about 1,300 feet below ground in the Frasassi Caves in central Italy.

“Using this cave environment, we provide a real-life field example of how we can detect life, past or present, on other planets,” said Jenn Macalady, associate professor of geosciences.

Originally, Macalady’s team was exploring the microbiology and geochemistry of the cave when they noticed something intriguing. They found variations in the isotopic content of atoms in the mineral gypsum, which is a weathering product of the cave’s formation. Not all gypsum is formed by microbes, but gypsum formed by microbes will have a different ratio of isotopes in the atoms. This isotopic variation, in combination with other data, indicates that life played an active role in producing the gypsum.

“We asked, what does this have to do with biology?” Macalady said. “Can we use these isotopic variations to show that life was responsible for forming the cave?”

Scientists know microbes, or microorganisms, speed up chemical reactions. For example, minerals like the gypsum found in the cave form much more quickly in the presence of microbes. The team collected samples of gypsum from the cave walls that were likely to have come in contact with fluids or moving air and used a mass spectrometer to study the isotopic ratio of the gypsum.

Because microbes speed up chemical changes, Macalady said the presence of isotopic biosignatures could be used to spot the involvement of life forms in forming other minerals, not just those appearing in the Frasassi Caves.

The structure of the Frasassi Caves—teeming with life at the lowest level of the cave and only remnants of life present at varying elevations above—offers a real-world laboratory setting for identifying current and remnant biosignatures.

We know that Mars has caves formed by volcanic activity, which offers a hospitable underground environment for microbes to cling to. Mars also has fluids like carbon dioxide and water. Those fluids could allow microbes to interact with minerals, speeding up chemical reactions like what was found in the Frasassi Caves.

Macalady, who is an associate of the Astrobiology Research Center, said she’s spent about 15 years attempting to identify a biosignature that would be relevant to an actual mission to Mars. She said finding reliable biosignatures is key to detecting life on other planets.

“If we were to find a similar environment on Mars, we could use this particular biosignature to test for the current or past presence of life,” Macalady said. “But I think more generally what we’re suggesting is that anytime you have microbes on a surface and a fluid moving past, the rates of reaction that the microbes generate would allow you to see variation in a signature like isotopes. The research is exciting because it’s not just an example. It’s a general prescription for looking for evidence of life.”

Next, the team will study what Frasassi cave levels can tell us about current and past life, possibly revealing what the new biosignature can tell us on a longer timescale.

“This research shows that life leave footprints behind wherever they exists,” said Muammar Mansor, a postdoctoral researcher in the department of geological sciences at the University of Texas at El Paso who received his Ph.D. from Penn State while conducting this research. “My main passion in research is to study life in the universe through the interdisciplinary field of astrobiology.”

This research was funded by NASA.