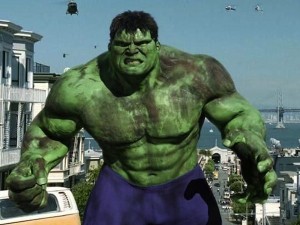 The ability of thermoelectric materials to convert heat into electricity, or electricity into cooling, represents a potentially huge source of clean, green energy. Consequently, thermoelectric materials have been heavily investigated over the past several decades. Past studies have shown that the efficiency of heat-to-electricity conversion – a metric known as the “figure-of-merit” or ZT – is inherently limited by the coupling of three key parameters: electrical conductivity, thermopower and thermal conductivity. 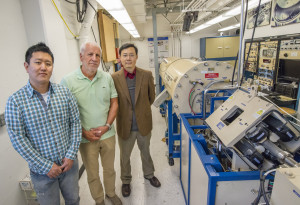 “The alpha particles knocked out atoms from their lattice sites and introduced native defects such as vacancies and interstitials,” says Joonki Suh, a member of Wu’s research group and lead author of a paper describing this study (see below). “Normally, you would expect defects to degrade a material’s performance, but the alpha particles inflicted relatively heavy damage beneath the surfaces of the bismuth telluride thin-films while allowing the surfaces to retain good electrical conductivity. The results were controlled native defects that acted beneficially and multi-functionally as electron donors and electron energy filters.”

As they expect native defects to be generated and behave in a similar manner to what was accomplished with bismuth telluride across a wide range of narrow-bandgap semiconductors, Wu and his collaborators believe their technique can be used to improve the ZT values of other thermoelectric materials without the need for complicated and expensive materials processing.

“For example,” Wu says, “one could use irradiation to improve the performance of thin-film thermoelectric devices that are potentially important for on-chip cooling of high-power electronics. One could also control the growth process of bulk thermoelectric materials to stabilize useful native defects.”

In addition, thermoelectric materials are being groomed for use in radiative environments, such as outer space. The data provided by this study should provide helpful guidelines for the selection of future materials. 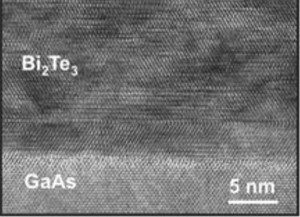 Cross sectional HRTEM image of bismuth telluride thin-film grown on gallium arsenide substrate.Image courtesy of Lawrence Berkeley National Laboratory“From a fundamental science point of view, defects, especially native defects, have always been a focus of research in the materials sciences, but their role in coupled thermal-electrical transport, as well as in entropy-transporting in thermoelectric materials, has been poorly understood,” Wu says. “Our work lays a solid foundation for a complete understanding of the physics behind these processes. It also serves as a reminder that defects in materials are not necessarily bad.”

This research was primarily funded by the DOE Office of Science and the National Science Foundation.