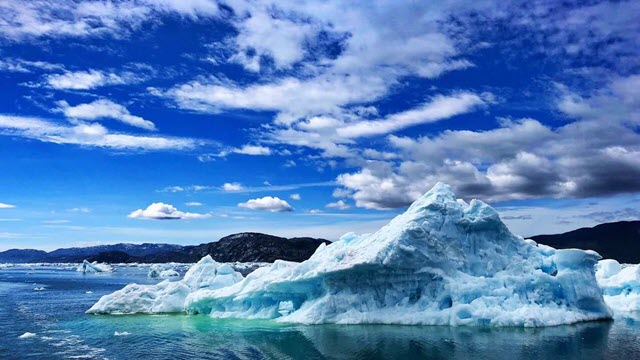 Large episodes of iceberg rafting in the past are thought to play a role in the variations of Atlantic Ocean circulation and climate changes during the deglacial periodCREDIT: Dr Hong Chin Ng, University of Bristol

A new study carried out by an international team of researchers, using the chemistry of ocean sediments, has highlighted a widespread picture of Atlantic circulation changes associated with rapid climate change in the past.

The new integrated dataset, published today in the journal Nature Communications, provides new insights into the interactions of melting ice, ocean circulation, and climate change, with potential implications for future long-term changes in the Earth systems with global climate change.

Dr Hong Chin Ng from the University of Bristol's School of Earth Sciences, is the study's lead author.

He said: "Large, rapid changes in climate, carbon dioxide, and ice sheet volume occurred as the planet emerged from the most recent ice age some 20,000 years ago.

"Changes in the circulation of the Atlantic Ocean are believed to have played an important role in driving these climate events—but direct evidence has been hard to find.

"In this study, we analyzed radioactive elements in ocean sediments to provide a much better-constrained picture of the strength of ocean circulation in the past, and therefore its relationship with the timing of ice sheet and climate changes during the last major deglaciation."

The study brought together results from sediment cores from across the Atlantic and revealed Atlantic circulation changes that coincide in timing with rapid climate transitions over the deglacial period.

Dr Ng added: "This is the first time that spatially coherent, widespread observations (from the tropics to high latitudes) have been brought to together on a common age scale.

"We found that the ocean slowed down its circulation in two steps, linked to two episodes of ice melting—one from Eurasia and one from North America."

The findings highlight the role of ice melting in driving the slow-down of ocean circulation.

This is important, say researchers, given ongoing accelerated ice melting at the northern high latitudes associated with climate change.

The new data can be used to test the response of climate models to changes in ice melt and ocean circulation during rapid climate transitions.