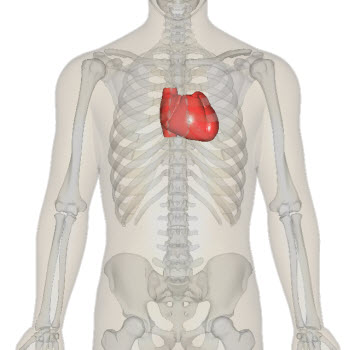 Researchers were surprised to find that Fstl1, a protein secreted by the epicardium, was missing from damaged epicardial tissue following heart attacks in humans.Image credit: BodyParts3D/Anatomography, Wikimedia CommonsScientists at the Stanford University School of Medicine and their colleagues have enabled damaged heart tissue in animals to regenerate by delivering a protein to it via a bioengineered collagen patch.

“This finding opens the door to a completely revolutionary treatment,” said Pilar Ruiz-Lozano, PhD, associate professor of pediatrics at Stanford. “There is currently no effective treatment to reverse the scarring in the heart after heart attacks.”

In a heart attack, cardiac muscle cells, called cardiomyocytes, die from a lack of blood flow. Replacing those dead cells is vital for the organ to fully recover. Unfortunately, the adult mammalian heart does not regenerate effectively, causing scar tissue to form.

Heart attacks cause millions of deaths annually worldwide and are predicted to skyrocket in the next few decades — tripling by 2030. About 735,000 Americans suffer a heart attack each year. Many victims now survive the initial injury, thanks to advances in early treatment, but the resulting loss of cardiomyocytes can lead to heart failure and possibly death. 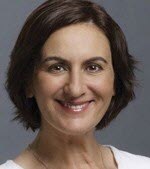 Pilar Ruiz-LozanoPhoto courtesy of Stanford University“Consequently, most survivors face a long and progressive course of heart failure, with poor quality of life and very high medical costs,” Ruiz-Lozano said. Various methods of transplanting healthy muscle cells into a damaged heart have been tried, but have yet to yield consistent success in promoting healing.

Previous heart regeneration studies in zebrafish have shown that the epicardium is one of the driving factors for healing a damaged heart, Ruiz-Lozano said. “We wanted to know what in the epicardium stimulates the myocardium, the muscle of the heart, to regenerate.” Since adult mammalian hearts do not regenerate effectively, they also wanted to know whether epicardial substances might stimulate regeneration in mammalian hearts and restore function after a heart attack.

She and her colleagues pinpointed Fstl1, a protein secreted by the epicardium, as a growth factor for cardiomyocytes. Not only did this protein kick-start the proliferation of cardiomyocytes in petri dishes, but the researchers were surprised to find that it was missing from damaged epicardial tissue following heart attacks in humans.

The researchers set out to reintroduce the protein back into the damaged epicardial tissue of mice and pigs that had suffered a heart attack. They did this by suturing a bioengineered patch, loaded with Fstl1, to the damaged tissue. The patches were made of natural material known as collagen that was structurally modified to mimic certain mechanical properties of the epicardium.

Because the patches are made of acellular collagen, meaning they contain no cells, recipients do not need immunosuppressive drugs to avoid rejection. With time, the collagen material gets absorbed into the organ. The researchers believe that the elasticity of the material, which resembles that of the fetal heart, is key to providing a hospitable environment for muscle regrowth. New blood vessels regenerated there as well.

Within two to four weeks of receiving the patch, heart muscle cells began to proliferate and the animals progressively recovered heart function. “Many were so sick prior to getting the patch that they would have been candidates for heart transplantation,” Ruiz-Lozano said. The hope is that a similar procedure could eventually be used in human heart-attack patients who suffer severe heart damage.

The work integrated the efforts of multiple labs around the world, including labs at the Sanford-Burnham Prebys Medical Discovery Institute in San Diego, UC-San Diego, Boston University School of Medicine, Imperial College London and Shanghai Institutes for Biological Sciences.

Stanford has a patent on the patch, and Ruiz-Lozano is chief scientific officer at Epikabio Inc., which has an exclusive option to license this technology.