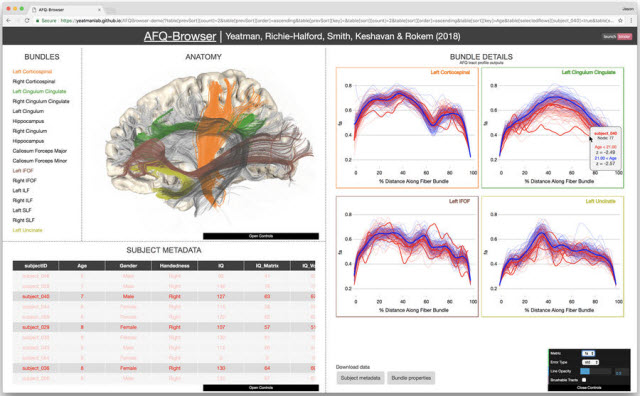 Over the past few years, scientists have faced a problem: They often cannot reproduce the results of experiments done by themselves or their peers.

This “replication crisis” plagues fields from medicine to physics, and likely has many causes. But one is undoubtedly the difficulty of sharing the vast amounts of data collected and analyses performed in so-called “big data” studies. The volume and complexity of the information also can make these scientific endeavors unwieldy when it comes time for researchers to share their data and findings with peers and the public.

Researchers at the University of Washington have developed a set of tools to make one critical area of big data research—that of our central nervous system—easier to share. In a paper published online March 5 in Nature Communications, the UW team describes an open-access browser they developed to display, analyze, and share neurological data collected through a type of magnetic resonance imaging study known as diffusion-weighted MRI.

Yeatman—who is an assistant professor in the UW Department of Speech & Hearing Sciences and the Institute for Learning & Brain Sciences (I-LABS)—is describing AFQ-Browser. This web browser-based tool, freely available online, is a platform for uploading, visualizing, analyzing, and sharing diffusion MRI data in a format that is publicly accessible, improving transparency and data-sharing methods for neurological studies. In addition, since it runs in the web browser, AFQ-Browser is portable—requiring no additional software package or equipment beyond a computer and an internet connection.

“One major barrier to data transparency in neuroscience is that so much data collection, storage, and analysis occurs on local computers with special software packages,” said senior author Ariel Rokem, a senior data scientist in the UW eScience Institute. “But using AFQ-Browser, we eliminate those requirements and make uploading, sharing, and analyzing diffusion-weighted MRI data a simple, straightforward process.” 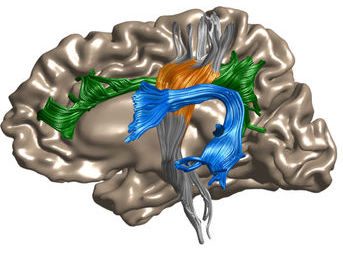 Depiction of the left hemisphere of the human brain. Colored regions are selected white matter regions that could be measured using diffusion-weighted MRI: Corticospinal tract (orange), arcuate fasciculus (blue), and cingulum (green)Image credit: Jason Yeatman/Ariel RokemDiffusion-weighted MRI measures the movement of fluid in the brain and spinal cord, revealing the structure and function of white-matter tracts. These are the connections of the central nervous system, tissue that are made up primarily of axons that transmit long-range signals between neural circuits. Diffusion MRI research on brain connectivity has fundamentally changed the way neuroscientists understand human brain function: The state, organization, and layout of white matter tracts are at the core of cognitive functions such as memory, learning, and other capabilities. Data collected using diffusion-weighted MRI can be used to diagnose complex neurological conditions such as multiple sclerosis (MS) and amyotrophic lateral sclerosis (ALS). Researchers also use diffusion-weighted MRI data to study the neurological underpinnings of conditions such as dyslexia and learning disabilities.

“This is a widely-used technique in neuroscience research, and it is particularly amenable to the benefits that can be gleaned from big data, so it became a logical starting point for developing browser-based, open-access tools for the field,” said Yeatman.

The AFQ-Browser—the AFQ stands for Automated Fiber-tract Quantification—can receive diffusion-weighted MRI data and perform tract analysis for each individual subject. The analyses occur via a remote server, again eliminating technical and financial barriers for researchers. The AFQ-Browser also contains interactive tools to display data for multiple subjects—allowing a researcher to easily visualize how white matter tracts might be similar or different among subjects, identify trends in the data and generate hypotheses for future experiments.

Researchers also can insert additional code to analyze the data, as well as save, upload, and share data instantly with fellow researchers.

“We wanted this tool to be as generalizable as possible, regardless of research goals,” said Rokem. “In addition, the format is easy for scientists from a variety of backgrounds to use and understand—so that neuroscientists, statisticians, and other researchers can collaborate, view data, and share methods toward greater reproducibility.”

The idea for the AFQ-Browser came out of a UW course on data visualization, and the researchers worked with several graduate students to develop and perfect the browser. They tested it on existing diffusion-weighted MRI datasets, including research subjects with ALS and MS. In the future, they hope that the AFQ-Browser can be improved to do automated analyses—and possibly even diagnoses—based on diffusion-weighted MRI data.

“AFQ-Browser is really just the start of what could be a number of tools for sharing neuroscience data and experiments,” said Yeatman. “Our goal here is greater reproducibility and transparency, and a more robust scientific process.”

Co-authors on the paper are UW physics doctoral student Adam Richie-Halford, UW chemical engineering doctoral student Josh Smith, and Anisha Keshavan, a UW postdoctoral researcher in I-LABS, the Institute for Neuroengineering, and the eScience Institute. The research was funded by the Gordon and Betty Moore Foundation, the Alfred P. Sloan Foundation, and the U.S. Department of Energy.