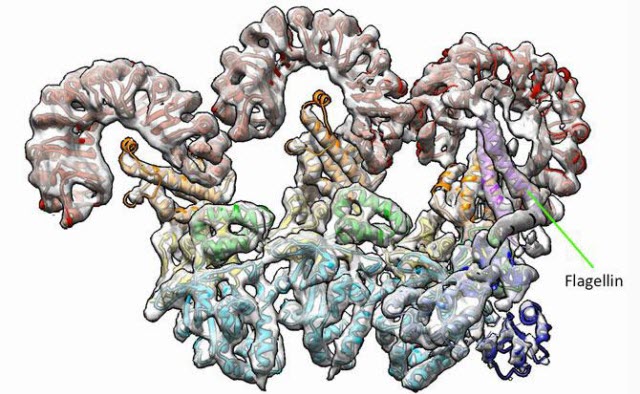 Shown is a structure of the first three subunits of an inflammasome, which consists of the NAIP5 and NLRC4 immune proteins, captured using cryo-electron microscopy. The NAIP5 subunit of the inflammasome is bound to flagellin (shown in light purple), a protein that is part of the flagellum some bacteria use to move around.Image credit: Nicole Haloupek/UC Berkeley

Biologists have resolved the structure of a ring of proteins used by the immune system to summon support when under attack, providing new insight into potential strategies for protection from pathogens.

The study, led by researchers at the Department of Energy's Lawrence Berkeley National Laboratory (Berkeley Lab) and at UC Berkeley, used cryo-electron microscopy to capture a high-resolution image of a protein ring called an "inflammasome" as it was bound to flagellin, a protein from the whiplike tail used by bacteria to propel themselves forward.

The inflammasome is formed when NAIP5 latches onto a flagellin molecule, and several copies of another protein, NLRC4, joins in to form the ring-shaped protein cluster.

"Looking at our structure, we can directly visualize the molecular interface between flagellin and NAIP5, revealing how the bacterial protein is recognized," said Nogales, who is also a UC Berkeley professor of biochemistry and molecular biology. "We found that flagellin is in contact with six different parts, called domains, of NAIP5, some of which had not previously been thought to be important for recognizing flagellin--and one of which had no known function at all."

The researchers theorize that the number of NAIP5 regions that are bound to flagellin is an important part of how the immune protein works.

Formation of the inflammasome triggers a chemical alarm in the cell that leads to pyroptosis, a particularly dramatic form of programmed cell death in response to invasion by a pathogen. Infected immune cells swell like a balloon and burst, releasing a swarm of cytokines that signal for help from other immune cells.

"Bacteria evolve quickly, duplicating themselves orders of magnitude faster than we can reproduce them and making multitudes of new mutant strains," said study co-lead author Nicole Haloupek, a PhD student in Nogales' lab. "If just one bacterium had a mutation in flagellin that allowed it to sneak past NAIP5, it would have a massive advantage and multiply. We hypothesized that the fact that so many domains of NAIP5 connect to flagellin meant that major mutations would be needed for a bacterium to go unnoticed."

To test this, the researchers created a variety of strains of the bacterium Legionella pneumophila, which causes Legionnaires' disease. Each strain had a different mutant version of flagellin.

Even though major mutations allowed invaders to slip past the inflammasome, the bacteria were compromised with dysfunctional flagellin that impaired their mobility.

The researchers also used the structure to conceive of a model of how the NAIP5-NLRC4 inflammasome is activated and assembled.

"We believe that before NAIP5 binds flagellin, NAIP5 is closed up and inactive," said Vance. "When flagellin binds NAIP5, it wedges NAIP5 into an open, active configuration that exposes the surfaces of NAIP5 that connect to NLRC4. Once the first NLRC4 connects to NAIP5, this creates a surface that can attract additional NLRC4 molecules, which then glom onto the growing inflammasome."

The study authors noted that the inflammasome structure presented in this paper could be used to study related immune system proteins.

"We are especially interested to know whether the multi-surface recognition of flagellin employed by NAIP5 is used by other immune sensors," said Vance.