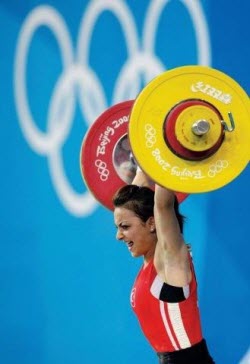 Olympians have lost medals over illegal steroid use, and now new tests could reveal another kind of cheating.Photo Credit: Newscom Olympics officials already contending with the illegal use of steroids among athletes are now being proactive about a potential new trend in performance enhancement: gene doping. Although tests for this type of cheating won’t be performed until after the Games, the results could still mean bad news for implicated athletes. An article in Chemical & Engineering News (C&EN), the weekly newsmagazine of the American Chemical Society, explores how experts are planning to catch cheating athletes.

Sarah Everts, a senior editor at C&EN, explains that the specific gene doping approach officials will be testing for is the presence of synthetic DNA that increases red blood cell production. And a higher red blood cell count can boost athletic performance. To test athletes for gene doping, scientists have created multiple analytical techniques. One such method screens athletes’ blood for the synthetic DNA. Another strategy searches blood samples for the presence of the viruses used to transport that DNA.

Athletes and trainers craving an edge often seem to be one step ahead of the game. But scientists are actively researching other ways to catch cheaters. Projects investigating tests for gene doping with DNA encoding other proteins, such as various growth factors, are ongoing. And cell transplants may be the next big thing that officials would need to detect. In addition, researchers are becoming savvier when it comes to detecting some types of steroids.