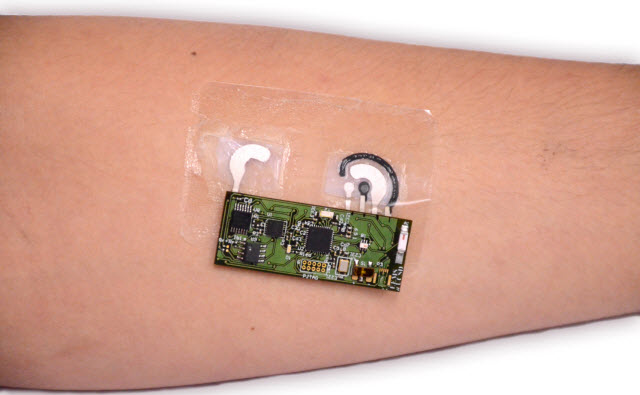 A skin patch that detects blood alcohol content could help drinkers know when they've had enough.Photo Courtesy of: Wang Lab

Overconsumption of alcohol can lead to errors in judgment, causing, for example, some people to get behind the wheel when they are impaired. To help imbibers easily and quickly know when they’ve had enough, scientists have developed a flexible, wearable patch that can detect a person’s blood-alcohol level from his or her sweat. The monitor, reported in the journal ACS Sensors, works quickly and can send results wirelessly to a smartphone or other device.

In the U.S., one person dies every 53 minutes in an alcohol-related car accident, according to the Centers for Disease Control and Prevention. Currently, ignition interlock devices are being marketed as a way to prevent drunk drivers from starting a car engine. But these are based on breath analysis, which can be affected by a number of factors including humidity, temperature and whether someone has used mouthwash. Recent research has demonstrated that sweat can be a more reliable real-time indicator of blood alcohol content. At least two transdermal sensors have been developed to measure alcohol levels in sweat, but users have to wait up to 2 hours for results. Joseph Wang, Patrick Mercier and colleagues at the University of California, San Diego, set out to make a more practical version.

With temporary-tattoo paper, the researchers developed a patch that tests blood alcohol content non-invasively in three rapid steps. It induces sweat by delivering a small amount of the drug pilocarpine across the skin. An enzymatic reaction leads to the electrochemical detection of the alcohol content. And a flexible electronic circuit board transmits the data via a Bluetooth connection to a mobile device or laptop. The steps take less than 8 minutes from start to finish. In addition to connecting to vehicles’ ignition interlock systems, the sensor could be a simple tool for bartenders, friends or law enforcement to use, the researchers say.

The authors acknowledge funding from the National Institute of Biomedical Imaging and Bioengineering, the Defense Threat Reduction Agency, and the University of California, San Diego, Center for Wearable Sensors.