Detecting chemicals without sophisticated laboratory instruments is challenging. One solution is materials that selectively capture the target chemical. To be useful, these materials must also produce a signal. Scientists recently investigated the fluorescent light signals from metal organic frameworks (MOFs). MOFs are porous crystalline materials that consist of metal ions connected by organic molecules. These materials can capture small molecules in their porous structure. Now, researchers have illuminated the factors that control MOFs’ fluorescent light signals. The light may turn on due to structural changes in the framework. To give a turn-off signal requires reorganizing how the electrons are organized in the MOF. Understanding these factors advances researchers’ ability to design and use MOFs as chemical sensors. 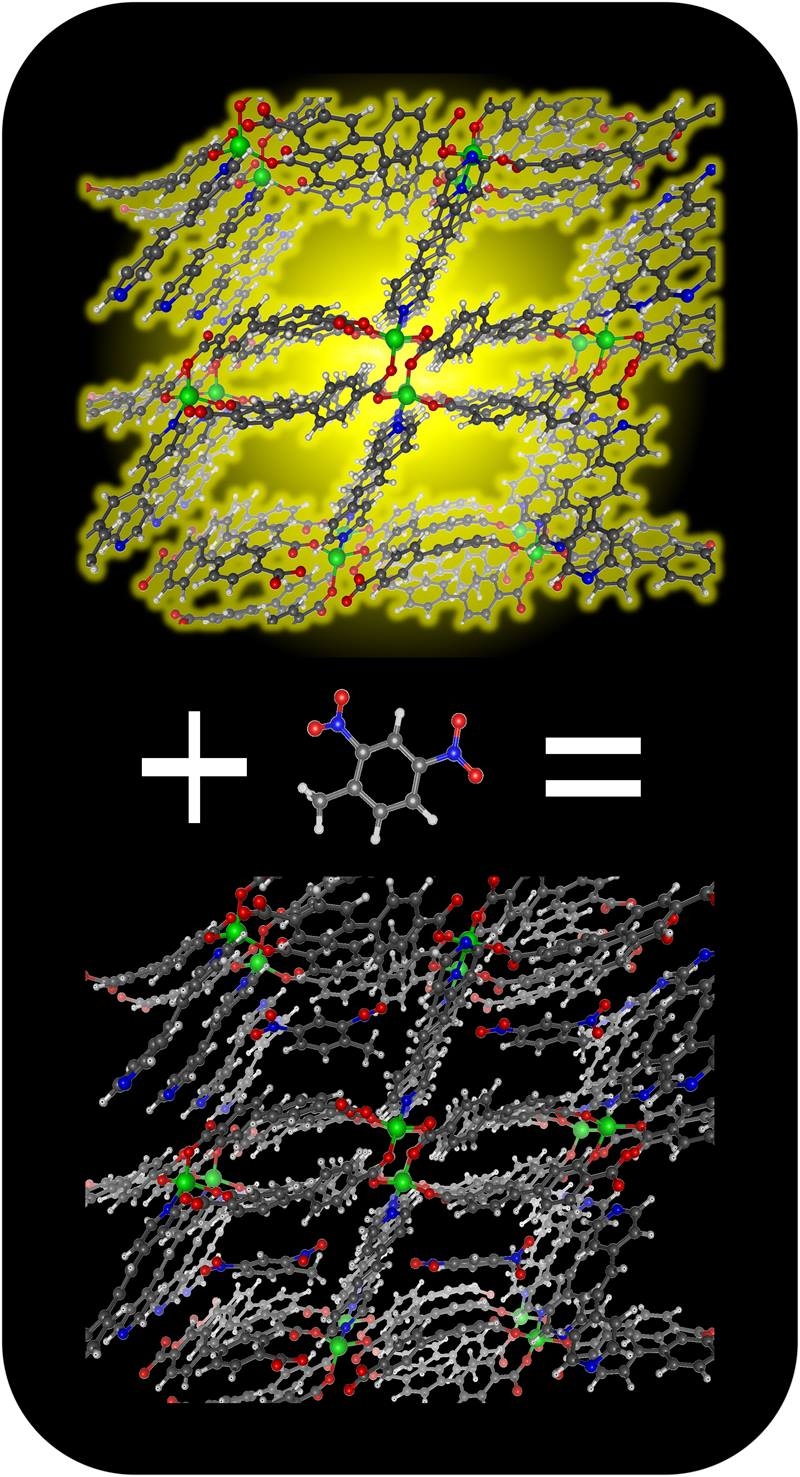 Metal organic frameworks have proven to be very useful in chemical processes such as gas capture, separation, and catalysis. Scientists can fine-tune MOF structure and porosity to be selective in capturing particular small molecules, called guests. However, MOFs do not usually produce signals when they capture guests. Now, researchers have shown how the structure of the MOF, and its interactions with the guest molecules, can produce a signal. With this understanding, researchers can design MOFs to be sensor materials for many important applications. These findings could lead to simpler ways to detect chemicals, including explosives.

MOFs are porous materials whose structures and pore sizes can be tailored to selectively capture small molecules. Now scientists have determined how the light signals from specific fluorescent MOF materials can change when they capture molecules. One MOF structure that the researchers studied is not fluorescent until it captures small molecules. The fluorescent light signal turns on when the molecule is present. Another MOF structure is fluorescent until it captures a specific type of compound. This capture turns the baseline fluorescent signal off. The researchers used photoluminescent spectroscopy to measure the light emission. They used infrared spectroscopy and computer modeling to understand how structure and interactions at the molecular level determined the fluorescence. The turn-on light signal arose when a captured compound caused structural changes in the material’s framework. Another MOF had a baseline fluorescent signal that turned off in the presence of dinitrotoluene, an explosive compound. In this case, electronic interactions in the MOF, rather than structural changes, determined the response. Understanding these processes should enable researchers to design new fluorescent responses into MOF materials and eventually into functional sensors.

- This press release was originally published on the DOE Office of Science website. It has been edited for style