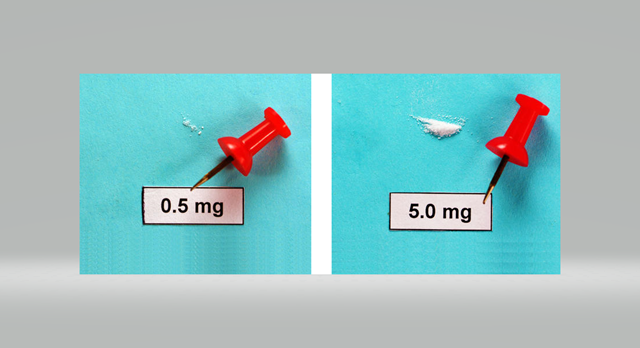 0.2 to 0.5 mg is typically a nonlethal dose of fentanyl powder. Any amount above 2.0 mg can be lethalCredit: Harvard University

Two years ago, Cambridge Police Detective Sgt. Louis Cherubino got a call from a needle exchange program in Central Square.

“We might have a case of carfentanil,” the caller said. Carfentanil, the most potent type of the already-potent opioid fentanyl, is estimated to be 10,000 times stronger than morphine. Used to sedate large animals like elephants, just a few crystals can cause an overdose in a human.

Cherubino, the supervisor of the Special Investigations Unit at the CPD, was concerned. If carfentanil was being sold on the street, he wanted to issue a community alert as soon as possible: Someone purchasing a drug billed as heroin or fentanyl but laced with carfentanil could overdose with far less than their typical dose. He collected the sample and called the state lab to request a rush drug analysis. But the lab couldn’t help.

Forensic laboratories, often overrun with requests and understaffed, prioritize evidence needed to prosecute cases. And though Cherubino’s department keeps several drug identification tools in house, some give false positives or, more concerning, false negatives: They indicate there is no drug where there absolutely is. Without a reliable test, he could not warn the community.

That’s where Christoffer Abrahamsson, a postdoctoral scholar in the lab of George Whitesides, came in. Eager to tune research for immediate application, he envisioned a new role for a chemical analysis tool designed in his lab: drug identification. In a paper published in Angewandte Chemie, he and a research team led by George Whitesides, the Woodward L. and Ann A. Flowers University Professor, and lab members Amit Nagarkar, Michael Fink, Daniel Preston, and Shencheng Ge, with the Drug Enforcement Administration’s Joseph Bozenko, describe how their density-separation technology could help law enforcement officers and forensic chemists in their fight to curb the opioid epidemic.

Called Magneto-Archimedes Levitation, or MagLev, the tool separates powdered substances into levitating clouds of crystals based on their density. Cheap, easy-to-use, and more accurate and sensitive than any currently available drug field-testing technology, the tool could significantly reduce false positives and negatives, and detect even smaller amounts of diluted substances—like the potent fentanyl, or potentially carfentanil—masked within other powders.

But, with limited time and resources, the local forensic chemists pushed Abrahamsson to contact the national lab at the Drug Enforcement Administration. Once again, he received immediate interest. But this time, he got a partner. In October of 2018, Abrahamsson traveled to Virginia to meet Bozenko, a Senior Research Chemist at the DEA’s Special Testing and Research Laboratory, to see how MagLev handled real samples of illicit drugs.

“It’s not every day you get to take a vacation to go see drugs,” said Bozenko, who develops portable, chemical detectors and novel separator techniques in his lab. Although he wanted to go into law enforcement like his father, Joe Sr., Bozenko switched to forensic chemistry during college. Now, he understands the dangers of field work and what tools could help DEA agents perform their job better and safer. “As much as my research is based in a lab, a lot of my focus is based on supporting those that are out there at traffic stops, those that are conducting law enforcement investigations,” he said.

Bozenko hosted Abrahamsson for three days. Together, the two chemists fed MagLev its first illegal powders: “We started out with fentanyl. That was our main target because it is one of the biggest problems right now, and it just worked directly, levitated directly,” Abrahamsson said. “It was almost too good to be true.”

MagLev stands as tall as a thermos. Two magnets rest like small bricks above and below a cuvette, a clear, straight-sided container. Inside, an amber, gasoline-like solution contains something called a gadolinium chelate complex—a compound wrapped like a claw around a weakly magnetic gadolinium ion. Introduce a foreign substance and that compound, attracted to the magnetic fields above and below, scrambles to get to the magnets, pushing aside anything in its way: glass, plastic, or heroin.

“If the liquid wants to be as close as possible to the magnets,” said Fink, a postdoctoral scholar in the Whitesides lab and an author on the paper, “then the other stuff has to get out of the way.” This upward-and-downward jostling, combined with gravity, forces each substance to levitate at a height corresponding to its density. If a substance shares the same density as the solution, for example, it will hang at the exact midpoint between the magnets.

Similar compounds already exist, but none can separate substances with such large ranges of densities. The trick is one that dissolves with higher concentrations of gadolinium, the magnetic element. More gadolinium crowds the solution, exerting more force as it races to the poles, and pushing even smaller crystals into tighter clouds.

Like sugar, most drug particles dissolve in water. So, the team needed a hydrophobic chelate, too—one that could levitate and not dissolve the powders. Other hydrophobic chelates exist, but the solutions end up more honey than gasoline. “Try to shake a glass of honey and then watch the air bubbles rise,” said Fink. “Sometimes they just stay put.” To isolate fentanyl, a powder as fine as confectioner’s sugar, they needed to design a less viscous solution.

“I wouldn't say it's an improvement because we didn't have anything to begin with,” Bozenko said. “This is novel in the fact that it is an entirely different tool to work with.” No other field-testing technology separates compounds into neat clouds, isolated for easy analysis. Current options like immunoassays (used in some pregnancy tests) and colorimetric tests that turn green, blue or yellow in response to certain chemicals, are relatively quick and uncomplicated. But if they pick up more than one chemical, the colors blend, offering a murky and inconclusive brown.

So far, MagLev has demonstrated separation of up to seven different substances at a time. But that max is based on the highest number the team has tested—they’re confident their tool can handle far more. For forensic chemists and law enforcement, that ability is precious: Street drugs are often mixtures of multiple drugs—heroin, fentanyl, cocaine, methamphetamines—combined with cutting agents like caffeine, sugar, baking soda, powdered milk, lidocaine, or even rat poison.

Ingredient isolation is especially valuable when a new drug pops up. Carfentanil, for example, is just fentanyl with a few chemical adjustments. A few more adjustments and a new—potentially even more dangerous—version could appear on the street. In 2018, the DEA discovered 22 previously unidentified substances; six of those were new types of fentanyl.

Bozenko said when new drugs come in, backlogs mount. Even in a forensic laboratory outfitted with the best chemical analysis tools, isolating an unidentified powder in a compound takes time. MagLev separates most compounds in just five to 25 minutes. Forensic chemists can then extract each purified cloud with a syringe and use technology as large and expensive as some cars—like nuclear magnetic resonance spectrometers or high-resolution mass spectrometry—to confirm their identities. Still, most local labs can’t afford these machines, so the MagLev, which could cost just $30 to $200, depending on the size of the magnets, could be a valuable addition to an analytical arsenal: New versions of fentanyl, for example, would hover in the same general area, betraying a shared chemical foundation. Even without more intense analysis, labs can take important precautions when handling a possible fentanyl analog, which can pose a significant—even lethal—threat to bystanders if handled improperly.

“[MagLev] could enable us to identify novel drugs in a faster time period, which does serve the public,” Bozenko said. Unidentified substances are, by definition, not illegal. Someone caught dealing an unknown chemical—even one responsible for lethal overdoses—cannot be prosecuted until a forensic chemist determines the powder’s chemical structure. MagLev’s quick and accurate results could speed the process from seizure to identification, regulation, and prosecution in the United States. In third-world countries where more expensive tools are out of the question, the cheap, power-independent technology could offer a reliable if not their only way to perform forensic chemical analysis.

Abrahamsson and Bozenko have plans to improve their technology, too. With a few tweaks, an officer could operate a smaller version in the field, mixing a powder into the solution, placing the cuvette between the magnets, and waiting for the separation to occur. Eventually, Bozenko hopes to pair MagLev with a spectrophotometric—or laser-based—tool to confirm the presumptive result on scene.

Last spring, a MagLev could have given Cherubino enough evidence to warn his community faster. But first, the Whitesides lab and the DEA still need to collect more data to get MagLev certified for forensic analysis.
For now, the Harvard Office of Technology Development will help protect the MagLev intellectual property and identify funding and commercialization opportunities. In fact, the University already licensed a previous version of MagLev to a biotechnology company to sort cells by density.

“We are looking for funding and partners to support our research and efforts to bring the benefits of MagLev to the analysis of drugs on the streets,” Abrahamsson said. “We intend to eventually make MagLev an off-the-shelf product available to our law enforcement officers.

He added: “The biggest reward for the research would be to see it used to save lives.”