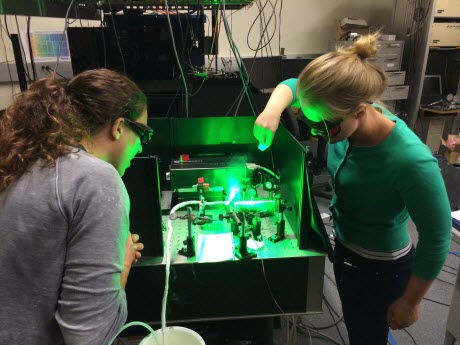 The research group of Alex Pines has recorded the first bulk room-temperature NMR hyperpolarization of carbon-13 nuclei in diamond in situ at arbitrary magnetic fields and crystal orientations.Photo credit: Christophoros VassiliouResearchers with the U.S. Department of Energy (DOE)’s Lawrence Berkeley National Laboratory (Berkeley Lab) and the University of California (UC) Berkeley have demonstrated that diamonds may hold the key to the future for nuclear magnetic resonance (NMR) and magnetic resonance imaging (MRI) technologies

In a study led by Alexander Pines, a senior faculty scientist with Berkeley Lab’s Materials Sciences Division and UC Berkeley’s Glenn T. Seaborg Professor of Chemistry, researchers recorded the first bulk room-temperature NMR hyperpolarization ?of carbon-13 nuclei in diamond in situ at arbitrary magnetic fields and crystal orientations. The signal of the hyperpolarized carbon-13 spins showed an enhancement of NMR/MRI signal sensitivity by many orders of magnitude above what is ordinarily possible with conventional NMR/MRI magnets at room temperature. Furthermore, this hyperpolarization was achieved with microwaves, rather than relying on precise magnetic fields for hyperpolarization transfer.

Pines is the corresponding author of a paper in Nature Communications describing this study. The paper is titled “Room-temperature in situ nuclear spin hyperpolarization from optically pumped nitrogen vacancy centers in diamond.”

The authors report the observation of a bulk nuclear spin polarization of six-percent, which is an NMR signal enhancement of approximately 170,000 times over thermal equilibrium. The signal of the hyperpolarized spins was detectedin situ with a standard NMR probe without the need for sample shuttling or precise crystal orientation. The authors believe this new hyperpolarization technique should enable orders of magnitude sensitivity enhancement for NMR studies of solids and liquids under ambient conditions.

“Our results in this study represent an NMR signal enhancement equivalent to that achieved in the pioneering experiments of Lucio Frydman and coworkers at the Weizmann Institute of Science, but using microwave-induced dynamic nuclear hyperpolarization in diamonds without the need for precise control over magnetic field and crystal alignment,” Pines says. “Room-temperature hyperpolarized diamonds open the possibility of NMR/MRI polarization transfer to arbitrary samples from an inert, non-toxic and easily separated source, a long sought-after goal of contemporary NMR/MRI technologies.”

“These results are an important contribution that adds to a growing arsenal of tools being developed by experts throughout the world, including leading laboratories in the US, Europe, Japan and Israel, for creating a more sensitive NMR/MRI signature at easily attainable conditions,” says Frydman, a professor of chemistry at thes Weizmann Institute of Science. which is located in Israel,  near Tel Aviv.  “Achieving this could open up a plethora of applications in physics, chemistry and biology.”

The combination of chemical specificity and non-destructive nature has made NMR and MRI indispensable technologies for a broad range of fields, including chemistry, materials, biology and medicine. However, sensitivity issues have remained a persistent challenge. NMR/MRI signals are based on an intrinsic quantum property of electrons and atomic nuclei called “spin.” Electrons and nuclei can act like tiny bar magnets with a spin that is assigned a directional state of either “up” or “down.” NMR/MRI signals depend upon a majority of nuclear spins being polarized to point in one direction – the greater the polarization, the stronger the signal. Over several decades Pines and members of his research group have developed numerous ways to hyperpolarize the spins of atomic nuclei. Their focus over the past two years has been on diamond crystals and an impurity called a nitrogen-vacancy (NV) center, in which optical and spin degrees of freedom are coupled. 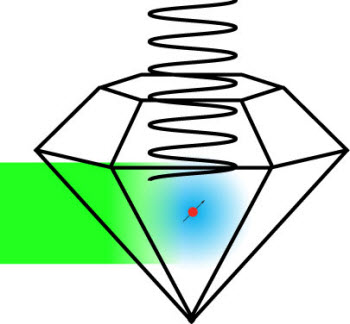 Image courtesy of Lawrence Berkeley National Laboratory“An NV center is created when two adjacent carbon atoms in the lattice of a pure diamond crystal are removed from the lattice leaving two gaps, one of which is filled with a nitrogen atom, and one of which remains vacant,” Pines explains. “This leaves unbound electrons in the center between the nitrogen atom and a vacancy that give rise to unique and well-defined electron spin polarization states.”

In earlier studies, Pines and his group demonstrated that a low-strength magnetic field could be used to transfer NV center electron spin polarization to nearby carbon-13 nuclei, resulting in hyperpolarized nuclei. This spin transference process – called dynamic nuclear polarization – had been used before to enhance NMR signals, but always in the presence of high-strength magnetic fields and cryogenic temperatures. Pines and his group eliminated these requirements by placing a permanent magnet near the diamond.

“In our new study we’re using microwaves to match the energy between electrons and carbon-13 nuclei rather than a magnetic field, which removes some difficult restrictions on the strength and alignment of the magnetic field and makes our technique more easy to use,” says King. “Also, in our previous studies, we inferred the presence of nuclear polarization indirectly through optical measurements because we weren’t able to test if the bulk sample was polarized or just the nuclei that were very close to the NV centers. By eliminating the need for even a weak magnetic field, we’re now able to make direct measurements of the bulk sample with NMR.”

In their Nature Communications paper, Pines, King and the other co-authors say that hyperpolarized diamonds, which can be efficiently integrated into existing fabrication techniques to create high surface area diamond devices, should provide a general platform for polarization transfer.

“We envision highly enhanced NMR of liquids and solids using existing polarization transfer techniques, such as cross-polarization in solids and cross-relaxation in liquids, or direct dynamic nuclear polarization to outside nuclei from NV centers,” King says, noting that such transfer of polarization to solid surface and liquids had been previously demonstrated by the Pines group using laser polarized Xe-129. “Our hyperpolarization technique based on optically polarized NV centers is far more robust and efficient and should be applicable to arbitrary target molecules, including biological systems that must be maintained at near ambient conditions.”