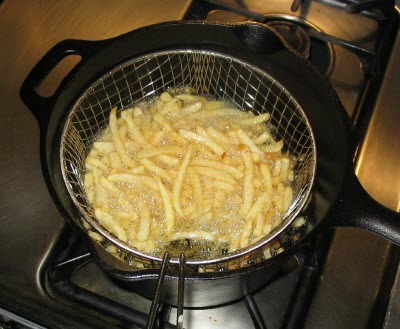 One group of study participants was asked to avoid grilling, frying, or baking their food, in favor of poaching, stewing, or steaming.Photo credit: Hayford Peirce, Wikimedia CommonsNEW YORK, NY — Simple changes in how we cook could go a long way towards preventing diabetes, say researchers at the Icahn School of Medicine at Mount Sinai. A new randomized controlled trial, published online July 29 in the journal Diabetologia, found that obese individuals with signs of insulin resistance showed improvement simply by avoiding the intake of advanced glycation endproducts, or AGEs, a byproduct of cooking found most commonly in dry heat-cooked or heat-processed foods.

The study is a follow-up to a 2014 article published in the journal Proceedings of the National Academy of Sciences. In the earlier study, the researchers, led by Helen Vlassara, MD, Professor Emeritus of Geriatrics and Palliative Medicine and Medicine at the Icahn School of Medicine at Mount Sinai, confirmed that high levels of AGEs in the body can cause pre-diabetes characterized by increasing insulin resistance, as well as brain changes similar to Alzheimer’s disease. This study focused more on diabetes risk.

Related Article: How Does the Environment Affect Obesity? Team Awarded Federal Grant to Get the Answer

“While food AGEs are prevalent, particularly in Western diets, our study showed that avoiding foods high in AGEs could actually reverse the damage that had been done,” said Dr. Vlassara. “This can provide us with new clinical approaches to pre-diabetes, potentially helping protect certain at-risk individuals from developing full diabetes and its devastating consequences.”

The researchers divided the study participants into two groups of obese individuals—one eating a regular diet, which is typically high in AGEs (Reg-AGE), and one with a diet low in AGEs (L-AGE). Members of the L-AGE group were instructed to avoid grilling, frying, or baking their food, in favor of poaching, stewing, or steaming.

“Elevated serum AGEs in individuals can be used as a marker to diagnose and treat ‘at risk’ obesity in patients,” said Jaime Uribarri, MD, professor of medicine (nephrology) at the Icahn School of Medicine at Mount Sinai, another investigator in the study. “Even without losing a significant amount of weight, a reduced AGE diet can help prevent diabetes in these patients.”

The researchers also found a positive effect on six key genes associated with the regulation of oxidant stress and inflammation. Four of these had been found to be suppressed at the baseline blood and urine analysis, but were markedly increased at the end, including anti-inflammatory SIRT1 and adiponectin, as well as the receptor for the removal of AGEs, AGER1, and glyoxalase-1.