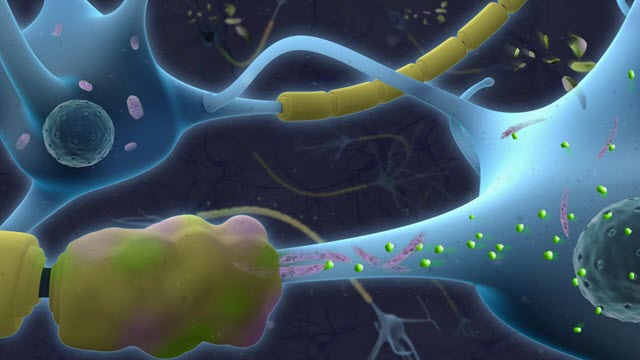 The top portion of this graphic features neurons (blue) with axons wrapped by normal myelin (yellow). The lower portion of this graphic illustrates neurons with pathological axons wrapped by damaged myelin (yellow and pink). The elongated mitochondria (purple) in the lower portion are dysfunctional and characterized by accumulation of toxic ceramides (green).Credit: Jeremy Weichsel at Biovisioning

NEW YORK — The disability burden for people with multiple sclerosis (MS) can vary significantly depending on whether they have a relapsing/remitting form of the disease, where they experience periods of clinical remission, or a progressive form, where they have continued neurological deterioration without clinical remission. Effective therapies exist for managing relapsing/remitting MS, but treatment for progressive MS has proved more challenging. Now, a new paper published in the journal Brain from researchers at the Advanced Science Research Center (ASRC) at The Graduate Center, CUNY, and Friedman Brain Institute at the Icahn School of Medicine at Mount Sinai has identified potential mechanisms that may inform the development of therapies that effectively manage progressive MS.

Previous research had suggested that dysfunction of neuronal mitochondria—the energy-producing subcellular organelles—occurs in the brains of MS patients with progressive clinical disability. However, the molecular mechanisms underlying this process remained elusive.

"Because the brain is bathed by the cerebrospinal fluid (CSF), we asked whether treating cultured neurons with the CSF from MS patients with a relapsing/remitting or a progressive disease course would possibly elicit different effects on neuronal mitochondrial function," said the study's primary investigator Patrizia Casaccia, Einstein Professor of Biology at The Graduate Center and founding director of the Neuroscience Initiative at the ASRC. "We detected dramatic differences in the shape of the neuronal mitochondria and their ability to produce energy. Only exposure to the CSF from progressive MS patients caused neuronal mitochondria to fuse and elongate while rendering them unable to produce energy. We therefore searched for potential mechanisms of CSF-induced neurodegeneration with the intent to define therapeutic strategies."

CSF samples were acquired from 15 patients with relapsing/remitting MS and 29 with progressive MS. These samples were extensively characterized, both functionally and metabolically. Video recordings of live, cultured rat neurons that were exposed to the CSF revealed important differences. Researchers detected a characteristic elongation of mitochondria exposed to CSF samples from progressive MS patients. This characteristic response was not present in mitochondria exposed to CSF from patients with a relapsing/remitting MS. Biochemical characterization of mitochondrial activity further revealed that elongated mitochondria were less functional and therefore less capable of producing energy, which eventually resulted in neuronal demise.

The research team delved deeper to determine what was present in the CSF of progressive MS patients that could be causing these mitochondrial changes and, possibly, an increased energy demand. Previous research has indicated that mitochondria elongate in an effort to generate more energy for cells when there is enhanced energetic demand or a decrease in available glucose. The researchers' lipid profiling of the CSF samples revealed that CSF from progressive MS patients had increased levels of ceramides.

"When we exposed cultured neurons to ceramides, we elicited the same changes caused by exposure to CSF from progressive MS patients, and we further discovered that ceramides induced neuronal damage by acting on two cellular mechanisms," said Maureen Wentling, a research associate in the Casaccia lab and the study's first author. "On one end, ceramides impaired the ability of neurons to make energy by directly damaging the mitochondria. On the other end, they also forced neurons to more rapidly uptake glucose in an attempt to provide energy for the cell."

The researchers were able to prevent the neurotoxic effect of CSF on cultured neurons by supplementing glucose. Supplementation isn't a sustainable approach in the diseased brain, however, so a different approach will ultimately be needed for developing therapies that improve mitochondrial function in patients with progressive MS.