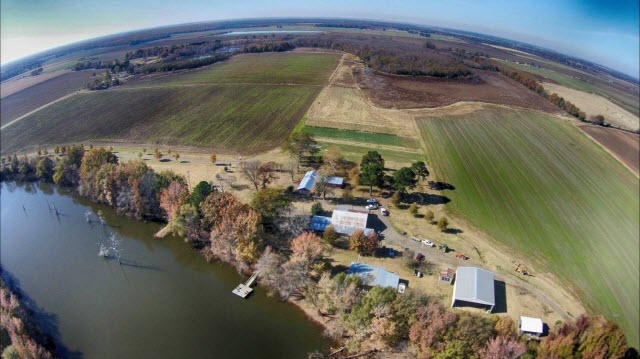 This farm in Arkansas may soon be the most scientifically advanced farm in the world.Photo credit: Jay McEntire

There's a farm in Arkansas growing soybeans, corn, and rice that is aiming to be the most scientifically advanced farm in the world. Soil samples are run through powerful machines to have their microbes genetically sequenced, drones are flying overhead taking hyperspectral images of the crops, and soon supercomputers will be crunching the massive volumes of data collected.

Scientists at the Department of Energy's Lawrence Berkeley National Laboratory (Berkeley Lab), working with the University of Arkansas and Glennoe Farms, hope this project, which brings together molecular biology, biogeochemistry, environmental sensing technologies, and machine learning, will revolutionize agriculture and create sustainable farming practices that benefit both the environment and farms. If successful, they envision being able to reduce the need for chemical fertilizers and enhance soil carbon uptake, thus improving the long-term viability of the land, while at the same time increasing crop yields.

A central piece of the research is understanding the role of microbes in the health of the soil.

"Microbes are a critical component of soil health and productivity," said scientist Ben Brown. "By understanding how microbes work and modifying the environments where they function, we can eventually engineer microbial communities to enhance soil productivity. What's more, Berkeley Lab's research is showing that healthy soils are more resilient to system shocks such as climate change, drought, and insects."

A key challenge for advancing these goals is the recognition of the significant spatial variability of soil properties within a single field and between fields. The "AR1K Smart Farm" project has brought together a range of expertise to focus on a 1,000-acre farm near Stuttgart, Arkansas, as a test bed. The project is co-led by Haruko Wainwright, an expert in environmental monitoring and estimation methodologies in Berkeley Lab's Earth and Environmental Sciences Area, and Ben Brown, an expert in machine learning and microbial analysis in the Biosciences Area.

Soil: the most complex ecosystem on the planet

The world's population is forecast by the United Nations to grow to 9.8 billion by 2050; feeding that many people will require raising food production by more than 70 percent. Yet industrialized farming practices have depleted a majority of the country's agricultural land of active carbon and a balanced microbial ecosystem. This is reflected in measurements of organic matter that average only 1 to 2 percent in most farmland, compared to historic levels of around 10 percent.

Related Article: The Secret to Tripling the Number of Grains in Sorghum and Perhaps Other Staple Crops

"Our farmers are dependent on a heavy prescription of genetically modified seeds, fertilizer, chemical herbicides, and pesticides to render a profitable crop," said Jay McEntire, manager of Glennoe Farms. "For the farmer this dependency raises their input costs and increases their economic risk. For the landowner depleted soils and chemical regimes represent risks for both economic and environmental sustainability."

Building on Berkeley Lab's ENIGMA and Microbes to Biomes initiatives, the project scientists are looking to develop and evaluate microbial amendments, which can be thought of as "probiotics for soil," to replace the carbon, phosphorous, and other nutrients that have been lost. Repeated use of bulk fertilizers and chemicals over the years have depleted the soils and caused other environmental damage, creating a vicious cycle that makes the current model of industrial agriculture potentially unsustainable—and increasingly expensive as more and more chemical and bulk salt-based fertilizer additives are required each year.

What's more, the world's supply of phosphorous is limited.

But Berkeley Lab is pursuing a microbial solution. "The good news is, there are lots and lots of microbes that have enzymes called phytases that are capable of resolubilizing inorganic phosphorous," which is essentially the "leftovers" in the ground after plants take up what they need from the rock phosphorous, according to Brown.

While the concept of microbial amendments is not new - indeed, commercial products are on the market - a predictive understanding of how the soil microbiome interacts with and affects plant growth is lacking.

"There are millions of species of microbes per cubic centimeter of soil," Brown said. "As you approach the plant root and its interior tissues, you go from millions to dozens. So plants do an exceptional job of farming their microbiomes. They release materials, including antimicrobial compounds, to selectively kill undesirable microbes, and they release food to incentivize beneficial microbes. It's a highly symbiotic and enormously complex interaction, and we understand almost nothing about it."

The challenge will be in figuring out the cause-and-effect relationships between the microbial amendments and plant growth. "You're trying to connect events at timescales relevant to molecules to events that occur over the course of a six-month growing season," said Brown. "You're trying to bridge something like 18 orders of magnitude across spatiotemporal scales. That is seriously nontrivial."

That's where the drones come in.

Hyperspectral sensors on the drones will be able to detect light reflectance from the plants and see hundreds of channels of spectra, from the visible to near infrared. "The human eye has only three channels—red, green, and blue," said Wainwright. "You can see if a leaf looks yellow or green. But with hundreds of channels you can measure carbon and nitrogen content, and you can tell a lot about plant health, plant disease, or leaf chemistry, all of which affect crop yield."

Machine learning is the tool that will tie all the data together. "The team science approach pioneered at Berkeley Lab is being put to use to integrate all the information within the machine learning context," said Wainwright. "Our ultimate goal is to provide actionable intelligence to the farming community."

Currently farmers have no such information, even though services and products have sprung up providing various "big data" solutions. "All the private companies have a big incentive to lock their own data sets, so they can't be used in conjunction with other data sets," Wainwright said. "That's where the public sector, like Berkeley Lab, can step in. We're not incentivized by profit."

The scientific challenge is formidable but not insurmountable. "We think it's a tractable problem, and we're hoping to prove it in the next year," Brown said.