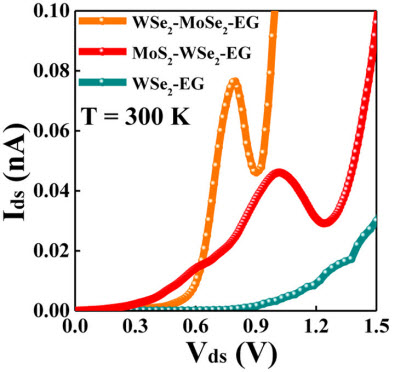 NDR is a phenomenon in which the wave nature of electrons allows them to tunnel through any material with varying resistance. The potential of NDR lies in low voltage electronic circuits that could be operated at high frequency.

“Theory suggests that stacking two-dimensional layers of different materials one atop the other can lead to new materials with new phenomena,” said Joshua Robinson, a Penn State assistant professor of materials science and engineering whose student, Yu-Chuan Lin, is first author on a paper appearing online today, June 19, in the journal Nature Communications. The paper is titled “Atomically Thin Resonant Tunnel Diodes Built from Synthetic van der Waals Heterostructures.”

Achieving NDR in a resonant tunneling diode at room temperature requires nearly perfect interfaces, which are possible using direct growth techniques, in this case oxide vaporization of molybdenum oxide in the presence of sulfur vapor to make the MoS2 layer, and metal organic chemical vapor deposition to make the WSe2 and MoSe2.

What caught Lin and Robinson’s attention was a sharp peak and valley in their electrical measurements where there would normally be a regular upward slope. Any unexpected phenomenon, if it is repeatable, is of interest, Robinson said. To explain their results, they consulted an expert in nanoscale electronic devices, Suman Datta, who told them they were seeing a 2D version of a resonant tunneling diode, a quantum mechanical device that operates at low power.

Coauthor Robert Wallace of the University of Texas at Dallas said this collaborative work represents an important achievement in the realization of useful 2D integrated circuits.

“The ability to observe the resonant behavior at room temperature with synthesized 2D materials rather than exfoliated, stacked flakes is exciting as it points toward the possibilities for scalable device fabrication methods that are more compatible with industrial interests. The challenge we now must address includes improving the grown 2D materials further and obtaining better performance for future device applications,” Wallace said.

Datta credits a theoretical understanding of the electron transport in the 2D layered materials to his post-doctoral researcher Ram Krishna Ghosh, whose calculations show close correspondence to the experimental results. Datta cautioned that the new resonant tunnel diode is just one element in a circuit and the next step will require building and integrating the other circuit elements, such as transistors, in 2D.

“The take home message,” he said, “is that this gives us a nugget that we as device and circuit people can start playing around with and build useful circuits for 2D electronics.”

Other coauthors include Sarah Eichfield at Penn State, Rafik Addou, Ning Lu, Hui Zhu, Xin Peng, and Moon Kim, all at UT-Dallas, Ming-Yang Li at Institute of Atomic and Molecular Sciences, Taiwan, and Lain-Jong Li, at King Abdullah University of Science and Technology, Saudi Arabia. The work was performed in conjunction with the Center for Two-Dimensional and Layered Materials (2DLM) at Penn State and supported by the Semiconductor Research Corporation and DARPA through the Center for Low Energy Systems Technology. Work at UT-Dallas was also supported through the Southwest Academy on Nanoelectronics sponsored by the Nanoelectronics Research Initiative and NIST.

The 2DLM Center conducts multidisciplinary research in the fast emerging field of atomically thin layered materials. Based in Penn State’s Materials Research Institute, the Center works with industry partners, national labs, and academic collaborators to discover and predict new properties that arise when novel materials are created one atomic layer at a time.