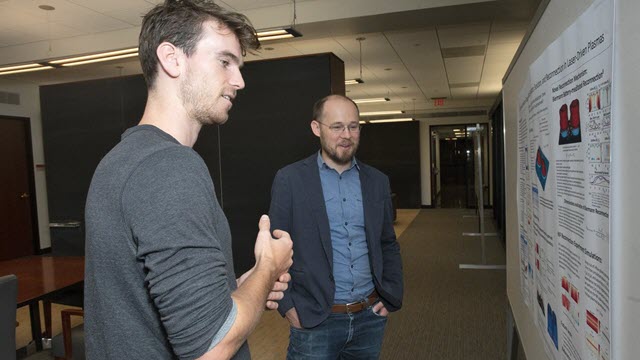 Physicists Jackson Matteucci and Will Fox with poster displaying their researchCREDIT: Elle Starkman/PPPL Office of Communications

Magnetic forces ripple throughout the universe, from the fields surrounding planets to the gases filling galaxies, and can be launched by a phenomenon called the Biermann battery effect. Now, scientists at the U.S. Department of Energy's (DOE) Princeton Plasma Physics Laboratory (PPPL) have found that this phenomenon may not only generate magnetic fields, but can sever them to trigger magnetic reconnection—a remarkable and surprising discovery.

The Biermann battery effect, a possible seed for the magnetic fields pervading our universe, arises in plasmas—the state of matter composed of free electrons and atomic nuclei—when the plasma temperature and density are misaligned. The tops of such plasmas might be hotter than the bottoms, and the density might be greater on the left side than on the right. This misalignment gives rise to an electromotive force that generates current that leads to magnetic fields. The process is named for Ludwig Biermann, a German astrophysicist who discovered it in 1950.

The new findings reveal through computer simulations a previously unknown role for the Biermann effect that could improve understanding of reconnection—the snapping apart and violent reconnection of magnetic field lines in plasmas that gives rise to northern lights, solar flares, and geomagnetic space storms that can disrupt cellphone service and electric grids on Earth.

The results "provide a new platform for replicating in the laboratory the reconnection observed in astrophysical plasmas," said Jackson Matteucci, a graduate student in the Program in Plasma Physics at PPPL and lead author of a description of the process in Physical Review Letters. Co-authors of the paper include his thesis advisers, Will Fox of PPPL and Amitava Bhattacharjee, head of the PPPL Theory Department, and researchers from other laboratories.

The simulations modeled published results of experiments in China that studied high-energy-density (HED) plasma—matter under extreme pressure such as exists in the core of the Earth. The experiments, in which PPPL played no part, used lasers to blast a pair of plasma bubbles from a solid metal target. Simulations of the three-dimensional plasma traced the expansion of the bubbles and the magnetic fields that the Biermann effect created, and tracked the collision of the fields to produce magnetic reconnection.

The simulations showed that temperature spiked in the reconnecting field lines and reversed the role of the Biermann effect that originated the lines. Because of the spike, the Biermann effect destroyed the magnetic field lines it had created, cutting them like a pair of scissors cutting a rubber band. The sliced fields then reconnected downstream, away from the original reconnection point. "This is the first simulation to show Biermann battery-mediated magnetic reconnection," Matteucci said. "This process had never been known before."

Tracking billions of ions and electrons

Modeling the HED experiments required tracking billions of ions and electrons interacting with one another and with the electric and magnetic fields that their motion created, in what are called 3-D kinetic simulations. Researchers carried out these simulations on the Titan supercomputer at the DOE Oak Ridge Leadership Computing Facility (OLCF) at Oak Ridge National Laboratory.

The scientists have since modeled a British experiment and are working on simulations of experiments performed at the Laboratory for Laser Energetics (LLE) at the University of Rochester and the National Ignition Facility at Lawrence Livermore National Laboratory.