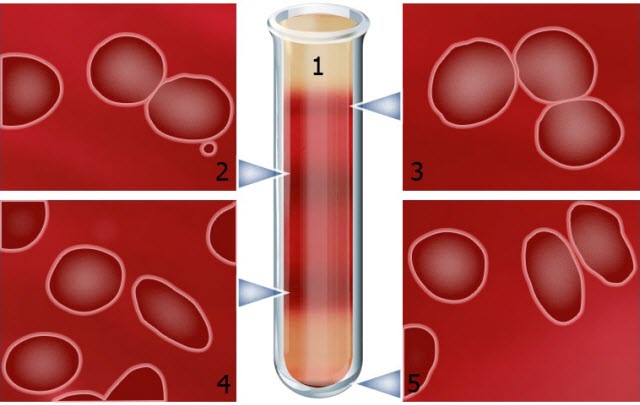 Researchers have established new biophysical markers that could help improve the understanding of sickle cell disease treatments. 1) Researchers separated cells in blood samples from patients with sickle cell disease to isolate cells of different densities. Hydroxyurea, an FDA-approved drug, improved the biophysical markers across all densities. 2) Red blood cells in people with the disease have an abnormal type of hemoglobin that causes the cells to become sickle shaped when they lose oxygen. 3) The least dense cells were disc-shaped and most like normal red blood cells. 4) When the sickled blood cells return to areas of the body with more oxygen, most of them regain their original shape, while accumulating damages after each sickling cycle. 5) As the cells circulate through the body repeatedly, they gradually become more dense and some of them become irreversibly sickled.Image Credit: Carnegie Mellon University

An interdisciplinary, international group of researchers has found new biophysical markers that could help improve the understanding of treatments for sickle cell disease, a step toward developing better methods for treating the inherited blood disorder that affects an estimated 80,000 to 100,000 Americans each year.

"There is a critical need for patient-specific biomarkers that can be used to assess the effectiveness of treatments for sickle cell disease," said Subra Suresh, president of Carnegie Mellon University and co-author of the study. "This study shows how techniques commonly used in engineering and physics can help us to better understand how the red blood cells in people with sickle cell disease react to treatment, which could lead to improved diagnostics and therapies."

The findings from engineers, physicists and clinicians from Carnegie Mellon, the University of Pittsburgh, the Massachusetts Institute of Technology, Florida Atlantic University, Korea University, the Korea Advanced Institute of Science and Technology, and Harvard University will be published this week in the online early edition of the Proceedings of the National Academy of Sciences (PNAS).

People with sickle cell disease have an abnormal form of hemoglobin, a protein found in red blood cells that carry oxygen throughout the body. Normal red blood cells are flexible discs that easily bend and stretch to flow through the body's narrow blood vessels. In sickle cell disease, the abnormal hemoglobin forms fibers that cause the blood cells to take on a flattened, sickled shape and stiffen when they lose oxygen. This change in shape and rigidity causes the red blood cells to be stuck in the blood vessels and prevents the transport of oxygen to the surrounding tissue. This can cause anemia and extreme pain and impact the health of the body's tissue and organs.

Currently, hydroxyurea is the only FDA-approved drug for sickle cell disease. The drug reduces sickling in red blood cells and is used to treat pain and reduce the need for blood transfusions in some patients, but it does not work in all patients. Researchers have been divided over what mechanisms cause the drug to work. Some believe it works by reactivating fetal hemoglobin, which is better at transporting oxygen than the abnormal hemoglobin that causes sickling. Others believe it works by increasing the volume of red blood cells, reducing the concentration of sickle hemoglobin.

"Our findings shine a light on the mechanism behind hydroxyurea action, which has long been debated in the scientific community," said Ming Dao, principal research scientist in MIT's Department of Materials Science and Engineering and co-author of the study. "It's exciting to see that using the latest optical imaging tools, we can now confirm which one is the dominating mechanism. Understanding the key mechanism of action will allow us to explore novel and improved therapeutic approaches for sickle cell disease."

The researchers hope that these biophysical markers can be combined with biochemical and molecular-level markers to assess things like the severity of a patient's sickle cell disease, determine whether or not a patient will respond to hydroxyurea treatment and monitor the effectiveness of that treatment.

Other co-authors of the study are: Poorya Hosseini, Sabia Z. Abidi, Dimitrios P. Papageorgiou, Zahid Yaqoob, and Peter T. C. So of MIT; E Du of Florida Atlantic University; Youngwoon Choi of Korea University; YongKeun Park of the Korea Advanced Institute of Science and Technology; John M. Higgins of Harvard; and Gregory J. Kato of the University of Pittsburgh.