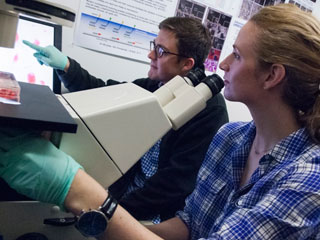 Perpetual renewal: When study authors Bryce Carey (left) and Lydia Finley (right) exposed mouse embryonic stem cells to an important metabolite, those cells (pink colonies on the screen) became more likely to renew themselves. That metabolite, alpha-ketoglutarate, is also involved in regulating chemical marks that can alter the expression of genes.The Rockefeller UniversityNew collaborative research between scientists at Rockefeller University and Memorial Sloan Kettering Cancer Center offers an explanation: Stem cells can rewire their metabolism to enhance an erasure mechanism that helps them avoid committing to a specific fate; in turn, this improves stem cells’ ability to renew themselves.

Experiments described today (December 10) in Nature link metabolism, chemical reactions that turn food into energy and cellular building materials, with changes to how genes are packaged, and, as a result, read. It turns out that by skewing their metabolism to favor a particular product, stem cells can keep their entire genome accessible and so maintain their ability to differentiate into any adult cell.

“All of the principal enzymes charged with modifying DNA as well as DNA-histone protein complexes called chromatin use the products of cellular metabolism to do so. But how specific alterations in metabolic pathways can impact gene expression programs during development and differentiation has remained a mystery,” says lead researcher C. David Allis, Joy and Jack Fishman Professor and head of the Laboratory of Chromatin Biology and Epigenetics. “This collaborative effort with Craig Thompson’s lab at Memorial Sloan Kettering reveals that the nutrients a stem cell uses, and how it uses them, can contribute to a cell’s fate by changing the chromatin landscape and, as a result, influencing gene expression.”

These changes are epigenetic, meaning they do not affect genes themselves, instead they alter how DNA is packaged, making it more or less accessible for expression. In this case, researchers were interested in a specific type of epigenetic change: chemical groups, known as methyl groups, that attach to chromatin. Generally, the addition of these methyl groups compacts and silences regions of the genome. To maintain their ability to give rise to any type of cell in the body, stem cells need all of their genome available, and so they must keep methylation in check.

Some epigenetic marks, such as methyl groups, are themselves products of metabolism – metabolites. What’s more some other metabolites participate in the reactions that remove methylations, making genes available for expression. After joining the Allis Lab, postdoc Bryce Carey presented an idea that tied these concepts together: “What if in stem cells the changes to chromatin reflect a unique metabolism that helps to drive reactions that help to keep chromatin accessible? This connection would explain how embryonic stem cells are so uniquely poised to activate so much of their genomes,” Carey says.

Mouse embryonic stem cells grown in a medium known as 2i are much better at renewing themselves than those grown in the traditional medium containing bovine serum, although researchers don’t fully understand why. Carey and co-first author Lydia Finley, a postdoc in Thompson’s metabolism-focused lab, compared the metabolism of cells grown in both media.

Carey and Finley first noticed that the 2i cells did not require glutamine, an amino acid most cells need to make the metabolite alpha-ketoglutarate, an important player in a series of metabolic reactions known as the citric acid cycle and a metabolite that had also been previously implicated in regulation of methylations on chromatin. Even without glutamine, however, the 2i cells managed to produce significant amounts of alpha-ketoglutarate.

“Basic chemistry dictates that you can drive a reaction forward by supplying more of the starting material while taking away the product. Since the conversion of alpha-ketoglutarate to succinate is linked to the removal of methylations, an increase in alpha-ketoglutarate and the accompanying decline in succinate may promote a loss of epigenetic marks and, perhaps, more self renewal,” Finley says. To test this hypothesis, they added alpha-ketoglutarate to serum-cultured stem cells, and, as expected, made them look and behave like the more renewal-prone 2i cells. They also found they could change the activity of certain stem cell genes by adding alpha-ketoglutarate or shutting down the methyl-removing enzyme that uses it.

“This newly established link between metabolism and stem cell fate improves our understanding of development and regeneration, which may, in turn, bring us a little closer to harnessing stem cells’ ability to generate new tissue as a way to, for example, heal spinal cord injuries or cure Type 1 diabetes. It may also add a new dimension to our understanding of cancer, in which differentiated cells erroneously take on stem-cell like properties,” Allis says.