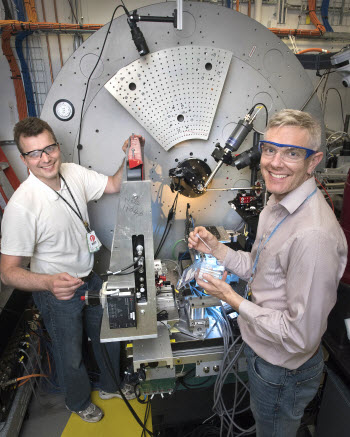 Brookhaven Lab physicists Pavol Juhas (left) and Simon Billinge at the National Synchrotron Light Source II's (NSLS-II) x-ray powder diffraction beamline. They are preparing to change a sample at the diffractometer, which replaces the instrument at NSLS where the measurements on the gold nanoclusters were done. Billinge and his team use an approach called atomic pair distribution function analysis to interpret the resulting x-ray scattering data and infer the sample's atomic structure.Photo courtesy of Brookhaven National LaboratoryUPTON, NY—Chemically the same, graphite, and diamonds are as physically distinct as two minerals can be, one opaque and soft, the other translucent and hard. What makes them unique is their differing arrangement of carbon atoms.

Polymorphs, or materials with the same composition but different structures, are common in bulk materials, and now a new study in Nature Communications confirms they exist in nanomaterials, too. Researchers describe two unique structures for the iconic gold nanocluster Au144(SR)60, better known as Gold-144, including a version never seen before.

"We discovered that the same number of gold atoms can arrange to form two different versions of the nanosized cluster," said co-first author Pavol Juhas, a physicist at the U.S. Department of Energy's (DOE) Brookhaven National Laboratory.

Their discovery gives engineers a new material to explore, along with the possibility of finding other polymorphic nanoparticles.

"This took four years to unravel," said coauthor Simon Billinge, a physicist at Brookhaven Lab, a physics professor at Columbia Engineering, and a member of the Data Science Institute at Columbia University. "We weren't expecting the clusters to take on more than one atomic arrangement. But this discovery gives us more handles to turn when trying to design clusters with new and useful properties."

Gold has been used in coins and jewelry for thousands of years for its durability, but shrink it to a size 10,000 times smaller than a human hair, and it becomes wildly unstable and unpredictable. At the nanoscale, gold likes to split apart other particles and molecules, making it a useful material for purifying water, imaging and killing tumors, and making solar panels more efficient, among other applications.

Setting out to confirm the predicted structure of Gold-144, researchers discovered an entirely unexpected atomic arrangement (right). The two structures, described in detail for the first time, each have 144 gold atoms, but are uniquely shaped, suggesting they also behave differently.Image courtesy of Kirsten Ørnsbjerg JensenThough a variety of nanogold particles and molecules have been made in the lab, very few have had their secret atomic arrangement revealed. But recently, new technologies are bringing these miniscule structures into focus.

Under one approach, high-energy x-ray beams are fired at a sample of nanoparticles. Advanced data analytics are used to interpret the x-ray scattering data and infer the sample's structure, which is key to understanding how strong, reactive, or durable the particles might be.

Billinge and his lab have pioneered a method, the atomic pair distribution function (PDF) analysis, for interpreting this scattering data. To test the PDF method, Billinge asked chemists at Colorado State University to make tiny samples of Gold-144, a molecule-sized nanogold cluster first isolated in 1995. Its structure had been theoretically predicted in 2009, and though never confirmed, Gold-144 has found numerous applications, including in tissue imaging.

Hoping the test would confirm Gold-144's structure, the team analyzed the clusters at the European Synchrotron Radiation Source in Grenoble, France, and used the PDF method to infer their structure. To their surprise, they found an angular core, and not the sphere-like icosahedral core predicted. When they made a new sample and tried the experiment again, this time using Brookhaven Lab's National Synchrotron Light Source and Argonne National Laboratory's Advanced Photon Source (both DOE Office of Science User Facilities), the structure came back spherical.

"We didn't understand what was going on, but digging deeper, we realized we had a polymorph," said co-first author Kirsten Jensen, formerly a postdoctoral researcher at Columbia and now a chemistry professor at the University of Copenhagen.

Further experiments confirmed the cluster had two versions, sometimes found together, each with a unique structure indicating they behave differently. The researchers are still unsure if Gold-144 can switch from one version to the other, or what, exactly, differentiates the two forms.

"While we still have much to learn about how the gold nanoparticles take on different shapes and what those shapes specifically are, we now know that polymorphism can exist and thus should be considered when preparing nanoparticles from other materials," said Juhas, who collaborated with Jensen on modeling and analyzing the PDF data.

To make their discovery, the researchers solved what physicists call the nanostructure inverse problem: how can the structure of a tiny nanoparticle in a sample be inferred from an x-ray signal that has been averaged over millions of particles, each with different orientations?

"The signal is noisy and highly degraded," said Billinge. "It's the equivalent of trying to recognize if the bird in the tree is a robin or a cardinal, but the image in your binoculars is too blurry and distorted to tell."

"Our results demonstrate the power of PDF analysis to reveal the structure of very tiny particles," added study coauthor Christopher Ackerson, a chemistry professor at Colorado State. "I've been trying, off and on, for more than ten years to get the single-crystal x-ray structure of Gold-144. The presence of polymorphs helps to explain why this molecule has been so resistant to traditional methods."

The PDF approach is one of several rival methods being developed to bring nanoparticle structure into focus. Now that it has proven itself, it could help speed up the work of describing other nanostructures.

The eventual goal is to design nanoparticles by their desired properties, rather than through trial and error, by understanding how form and function relate. Databases of known and predicted structures could make it possible to design new materials with a few clicks of a mouse.

The study is a first step.

"We've had a structure model for this iconic gold molecule for years and then this study comes along and says the structure is basically right but it's got a doppelgänger," said Robert Whetten, a professor of chemical physics at the University of Texas, San Antonio, who led the team that first isolated Gold-144. "It seemed preposterous to have two distinct structures that underlie its ubiquity, but this is a beautiful paper that will persuade a lot of people."

The study's other authors are Marcus Tofanelli and Christine Heinecke of Colorado State and Gavin Vaughan of the European Synchrotron Radiation Facility. 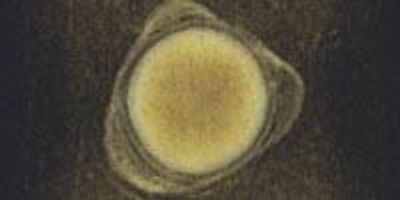