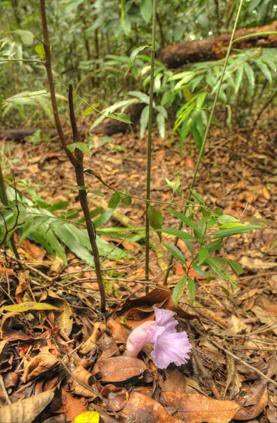 The discovery was published in the online version of the journal Phytotaxa.

The plant, Aframomum ngamikkense, is named after the four main peaks in the Kabobo massif: Ngandja, Misotshi, Kabili, and Kabobo (Ngamikka). It is confined to the higher altitudes of the forest between 1,500-2000 meters. It only occurs in small patchy regions of the massif but is locally abundant when it is found.

The recent naming of the ginger brings the number of known endemic species to the Kabobo Massif to eight: four mammals including two bats, a bird, and three plants. WCS surveys in 2007 and 2012 led to the identification of these new species which have been described in collaboration with Julian Kerbis-Peterhans of the Chicago Field Museum and Eberhard Fischer at the University of Koblenz-Landau.

There are around 50 known species of ginger scattered throughout Africa including Madagascar. The fruits are eaten by local people and wildlife including gorillas and chimpanzees. The roots are consumed to a lesser extent.

A recent expedition by Trento Science Museum and WCS to the massif may have found more new species. Genetic analyses are currently being made to assess whether this is the case. Several frog species and a pangolin are being assessed totaling at least five potentially new additional species.

Said Andrew Plumptre, WCS senior scientist: "While mountains are known to encourage speciation, it is uncommon to find so many unique species at one site, particularly when we have only made biodiversity surveys over a period of about four months."

The Kabobo Massif is one of the most biodiverse sites in Africa. To date 558 terrestrial vertebrates and 1,410 plant species have been documented. In the 1950s, Belgian scientists discovered the Prigogine's black and white colobus monkey (a subspecies of the Angolan colobus) and the Kabobo Apalis (Apalis kaboboensis) a bird only known from here. Civil war and insecurity from 1960 until 2007 prevented further work or its protection. The Kabobo Natural Reserve had its boundaries formally approved in December 2016 by the provincial governor of Tanganyika Province—a critical step in establishing and ensuring the effective protection of this important site. It adjoins the recently established Ngandja Reserve.

WCS scientists are hopeful that the recent wave of discoveries will result in both reserves being upgraded to National Reserve status, giving them a stronger legal status and protection.

Said Deo Kujirakwinja, WCS project manager in Kabobo: "The gazettement process of the Kabobo Reserve has been made with the participation of local communities, and co-management of the reserves is improving the protection of this and many other species in Kabobo."

Kabobo and Ngandja Reserves combined with Luama Katanga Reserve protect a total of 2,683 square miles (6,951 square kilometers). This is the largest block of forest on the shores of Lake Tanganyika and provides an important watershed for this lake and protection for breeding sites for the lake's fisheries. A conservation action plan was developed for this landscape by the provincial authorities of Tanganyika and South Kivu with community leaders and WCS's technical support, and funding is being sought to implement this plan.