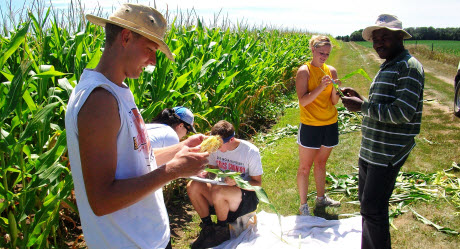 The two-year project assessed insect populations in cornfields on 53 farms in eastern South Dakota. It is the first to use social network analysis to study insect communities in the corn production system to understand how large groups of organisms interact from an applied angle. The project was supported by a $150,000 National Institute of Food and Agriculture seed grant.

"This research gives farmers a metric whereby they can assess their corn production system," said Lundgren, pointing out that use of no-till and a diverse crop rotation plan can improve insect diversity.

The results are published in the July 31 issue of Science Advances. Philippa Benson, managing editor of Science Advances, said, "This is high quality research that is novel and that moves the field of concern forward meaningfully." 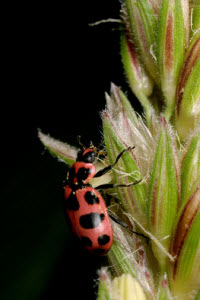 Shown on a corn anther, this lady beetle or Coleomegilla maculata will help reduce the number of pests in the plant.Photo courtesy of South Dakota State UniversityLundgren and a team of 10 economics and biology graduate and undergraduate students harvested 50 plants during pollination on each farm.

They dissected approximately 2,650 plants and identified more than 37,000 insect specimens.

The research suggests that it's not the number of species, but the balance of species within the insect communities that are responsible for pest suppression.

"To understand the ecological community, you need to look at the system in the real world," pointed out Fausti, who worked with the South Dakota Corn Utilization Council and SDSU Extension to select the sites. Each field had to cover at least 10 acres.

Farms ranged from conventional to organic, Lundgren explained. The variety of crops and landscaping characteristics make the study "a good snapshot of corn production in the state."

During the last 50 years, American agriculture has moved to a more chemically intensive production system, Fausti explained. In 2013, U.S. farmers spent $3.2 billion to control corn pests. "Unfortunately, the chemicals we use have a negative impact on nontargeted insects."

The researchers emphasized the need to focus on profitability rather than yields. Farmers that adopt a diverse cropping system can reduce the need for insecticides and thus lower their input costs, according to Lundgren.

In addition, a more diverse cropping system also decreases the revenue variability in farm production, Fausti explained. "It's about not putting all your eggs in one basket."

Lundgren is working on similar studies, including a project to assess insects and profitability on farms in North Dakota, South Dakota and Nebraska. "This opens a lot of opportunities to apply community ecology in ways never done before."