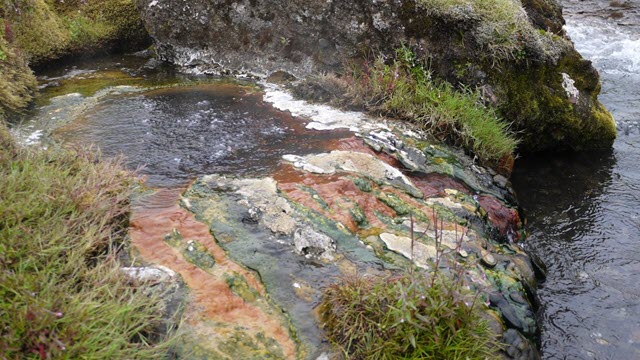 Despite their ancient history and ubiquity, the diversity of bacteria remains one of the most cryptic chapters of the history of lifeCredit: Stilianos Louca, University of British Columbia

Bacteria go extinct at substantial rates, although appear to avoid the mass extinctions that have hit larger forms of life on Earth, according to new research from the University of British Columbia (UBC), Caltech, and Lawrence Berkeley National Laboratory. The finding contradicts widely held scientific thinking that microbe taxa, because of their very large populations, rarely die off.

The study, published today in Nature Ecology and Evolution, used massive DNA sequencing and big data analysis to create the first evolutionary tree encompassing a large fraction of Earth's bacteria over the past billion years.

"Bacteria rarely fossilize, so we know very little about how the microbial landscape has evolved over time," says Stilianos Louca, a researcher with UBC's Biodiversity Research Centre who led the study. "Sequencing and math helped us fill in the bacterial family tree, map how they've diversified over time, and uncover their extinctions."

Louca and colleagues estimate between 1.4 and 1.9 million bacterial lineages exist on Earth today. They were also able to determine how that number has changed over the last billion years—with 45,000 to 95,000 extinctions in the last million years alone.

"While modern bacterial diversity is undoubtedly high, it's only a tiny snapshot of the diversity that evolution has generated over Earth's history," says Louca.

Despite the frequent, steady extinction of individual species, the work shows that—overall—bacteria have been diversifying exponentially without interruption. And they've avoided the abrupt, planet-wide mass extinctions that have periodically occurred among plants and animals. Louca suspects that competition between bacterial species drive the high rate of microbial extinctions, leaving them less prone to sudden mass, multi-species extinctions.

Past speciation and extinction events leave a complex trace in phylogenies—mathematical structures that encode the evolutionary relatedness between existing bacterial species.

"This study wouldn't have been possible 10 years ago," says Michael Doebeli, UBC mathematician and zoologist, and senior author on the paper. "Today's availability of massive sequencing data and powerful computational resources allowed us to perform the complex mathematical analysis."

Next, Louca and his colleagues want to determine how the physiological properties of bacteria evolve over time, and whether their ecological diversity has also been increasing similarly to their taxonomic diversity. If this is true, it would mean that even ancient and relatively simple organisms such as bacteria still have the potential to discover novel ways to survive.