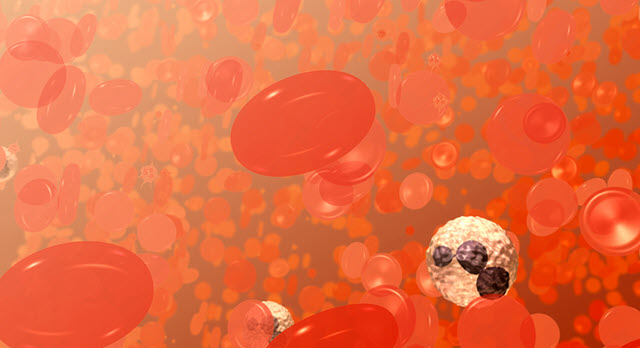 Blood platelets are like the sand bags of the body. Got a cut? Platelets pile in to clog the hole and stop the bleeding.

But genetic mutations, infections, and even radiation from cancer treatments can slash platelet numbers, leading to a condition called thrombocytopenia and putting people at risk for internal bleeding.

Now, scientists at Scripps Research have uncovered a new approach for treating thrombocytopenia. As reported in the journal Proceedings of the National Academy of Sciences, they found that an enzyme can boost platelet production and may work as a future therapeutic.

"This opens up new options for treating diseases of the blood," says Paul Schimmel, PhD, professor at Scripps Research and co-senior author of the study with Professor Zaverio Ruggeri, MD, of Scripps Research.

Previous research had shown that while the enzyme YRSACT has a crucial role in decoding DNA (a process called translation), it appears to have additional jobs in the cell. YRSACT was abundant in blood platelets, the cells that let wounds clog and heal. So, the Schimmel and Ruggeri labs sought to uncover why.

Their study is the first to show that YRSACT is key to one method of platelet production. Schimmel, Ruggeri and their colleagues worked with a platelet-deficient mouse model. Animals injected with YRSACT showed a dramatic increase in platelet production, especially under stressful conditions, such as radiation similar to what cancer patients face.

So how does YRSACT work? The researchers found that YRSACT increases the production of large bone marrow cells called megakaryocytes, which are the precursors to platelets.

Until this discovery, thrombopoietin (TPO) was previously the only other protein known to increase platelets. Schimmel says a version of TPO is currently used as a drug to treat some cases of thrombocytopenia. However, TPO has limitations, making it unsuitable and hazardous in some clinical settings.

Showing that YRSACT could be useful in human patients posed its own challenges. Congenital thrombocytopenia is rare, and even finding the right blood cells to test in thrombocytopenia patients is like finding a needle in a haystack.

Remarkably, the Scripps researchers were able to team up with a group at the Center for iPS Cell Research and Application at Kyoto University to test a stem cell line developed from a thrombocytopenia patient.

"I think this was a beautiful collaboration of groups having distinct expertise to work together to accomplish our goal," says study co-first author Sachiko Kanaji, PhD, MD, a staff scientist at Scripps Research.

Their findings in these human cells further confirmed that YRSACT can control a mechanism in cells to produce life-saving platelets.

Taisuke Kanaji says the next step in the research is to understand the conditions-from infections to radiation-that prompt the body to activate YRSACT on its own.