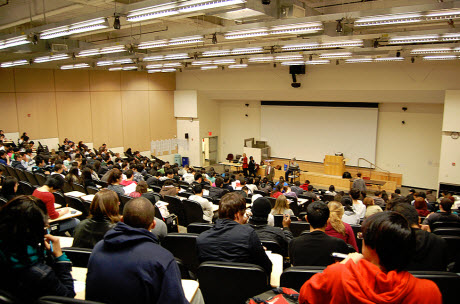 A lecture hall at Baruch College, New York City, USA.Photo credit: Xbxg32000, Wikimedia CommonsWashington, DC  -  RateMyProfessors.com is the largest online source for student-generated ratings of college and university professors. Millions of students have evaluated professors on the site, which claims that more than 4 million students use it each month to glean insights about potential professors. But RateMyProfessors (RMP) doesn’t allow for professors to directly defend themselves against negative ratings. This distinguishes the site from the many corporate sites that do allow feedback about products or customer service, potentially allowing the reader a more thorough profile.

Now a new study, published in the National Communication Association’s journal, Communication Education,explores whether classroom learning can be impacted if professors are allowed to respond to negative characterizations on RMP. Researcher Yuhua (Jake) Liang of Chapman University tested this hypothesis with study participants who read negative evaluations of an unknown professor on RMP and were told that the instructor was a candidate for a teaching position at their university. The professor was then allowed to comment on the negative reviews using scripts in which she affirmed her qualities of fairness, concern for student learning, and/or official teaching experience. Next, the students watched video of that professor delivering a lecture and were tested on the content of the instruction.

Because students actively use sites such as RMP to select instructors, the results of Liang’s research might inform university policies about whether instructors should be allowed to respond to student comments.  If professors are allowed to respond, Liang’s research suggests the most productive way to do so: emphasizing fairness in classroom policies and caring about student success, rather than rebutting individual charges, which could provoke further negative comments.