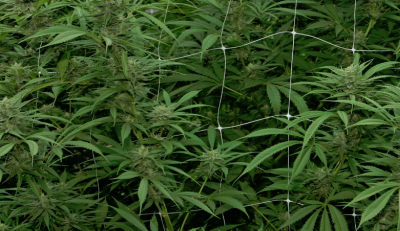 A recent donation places Australia in the front rank of countries, such as the Netherlands, the United States and Israel, leading the world in cannabinoid science.Photo credit: WAMM, Wikimedia Commons"Our vision is to make Australia a world-leader in researching how to realise the powerful medicinal potential of the cannabis plant," said Barry Lambert, who together with his wife Joy, has funded the Lambert Initiative.

"The experience of our granddaughter, who suffers debilitating epilepsy, has opened our eyes to the extraordinary possibility of cannabinoids treating not only her condition but a range of chronic illnesses that often don't respond to conventional treatments.

"We believe this investment in the future of Australian science and medicine will provide the much-needed evidence to rapidly advance the use of medicinal cannabinoids in the treatment of childhood epilepsy and other serious illnesses."

The donation is the largest gift ever made to research at the University of Sydney.

"The Lamberts' unprecedented gift holds the promise of achieving innovative and effective new medicines to alleviate the suffering of countless numbers of people," said Dr Michael Spence, Vice-Chancellor of the University of Sydney.

"It enables research across a broad range of applications from addiction, cancer, obesity, childhood epilepsy and chronic pain to dementia and mental health disorders. Their generosity recognises the University's commitment to cross-disciplinary research that can achieve life-changing outcomes. It is our privilege and responsibility to respond.

"A world-first in the extent of its support for medicinal cannabis research, it places Australia in the front rank of countries, such as the Netherlands, the United States and Israel, leading the world in this new era of cannabinoid science."

The Lambert Initiative funds a multi-year program to build on the University's extensive clinical and scientific cannabinoid-related expertise to ultimately produce cannabinoid-based medicines.

NSW Premier Mike Baird has congratulated the University of Sydney on the significant initiative and applauded the generosity of the Lamberts.

"NSW is breaking new ground in terms of medical cannabis research and this major investment confirms our state's leadership in this area," Mr Baird said.

"The Lamberts' investment gives our cause enormous momentum and my hope is it dramatically increases the cross-sector knowledge sharing required to ultimately produce cannabinoid-based medicines that are safe, reliable and affordable.

"I recently met with the lead investigators of the Lambert Initiative and am pleased that they are already embedded in our clinical trials."

A priority of the Initiative will be to understand how cannabidiol (CBD) works to treat paediatric epilepsy and to explore the potential of the nine other cannabinoids, currently identified as of greatest therapeutic interest, to address the condition.

The strategy will go on to determine which of these cannabinoids hold the greatest promise in treating specific diseases and, using rigorous, high-quality evidence, move them towards human clinical trials.

From the start the Initiative will undertake medicinal chemistry to drive the creation of new highly targeted medications based on its emerging understanding of how cannabinoids treat disease. At the heart of the program will be sharing such knowledge with the public, government and medical professionals with both outreach and education.

The lead investigators of the Lambert Initiative, from the Faculty of Science and Sydney Medical School, with decades of cannabinoid research between them, are Professor Iain McGregor,Associate Professor Nicholas Lintzeris and Dr David  Allsop.

"We have all devoted our careers to cannabis science, one of the fastest moving frontiers in pharmacology. We now know there are more than 100 different compounds we call cannabinoids, many of which have incredible therapeutic properties that we are only beginning to understand," said Professor Iain McGregor.

"The Lambert Initiative allows us to gather the key science researchers and clinicians from Australia and worldwide to work within, or in association with, the Lambert Initiative. Much of the research will happen on-site at the University of Sydney but it will also support and promote specialist researchers throughout Australia to encourage them to undertake collaborative cannabinoid-related research.

"We have also made a flying start by becoming embedded in the NSW government's sponsored clinical trials of medicinal cannabis, offering our unique cannabinoid clinical trials expertise, including exploring its safety and effectiveness for treating paediatric epilepsy."