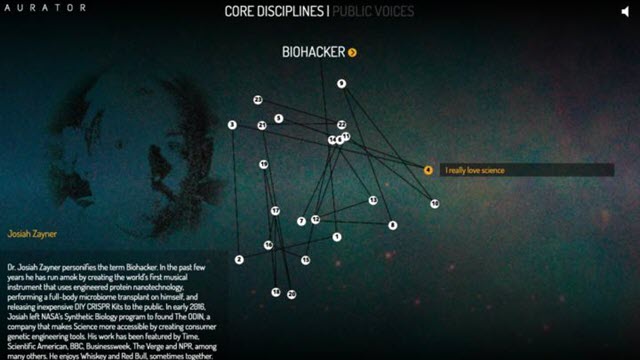 This is a screenshot from the AURATOR platformCREDIT: University of Copenhagen

Science projects within controversial fields such as synthetic biology could benefit from experimenting with communication settings in which experts share their thoughts and feelings with each other and the public. This allows for a more open and constructive dialogue with the public about research—and may even generate new research ideas, a new PhD thesis shows.

Studies have shown that effect and emotion shape the way the public reacts to new scientific ideas and discoveries, particularly controversial ones. But what about the scientists and experts themselves? Do they not have doubts, fears, and hopes about their projects that shape the way they think and communicate about their research? This was one of the central questions which science communicator Britt Wray addressed in her PhD project at the University of Copenhagen:

"The field of synthetic biology, which I have studied in this thesis, has often been criticized for an instrumental approach to public engagement that merely aims to gain public acceptance of its practices; but treating science communication as something that is just designed to teach the facts and convince the public of the merits of a particular scientific field may be counter-productive and generate distrust," Wray explains.

In order to study alternative and more open approaches to communicating about synthetic biology, Britt Wray set up the interactive web-based platform AURATOR, in which a multi-disciplinary group of experts working within the field could share their thoughts and feelings about their work in the form of weekly audio diaries that also allowed the public to engage with them in an open dialogue.

Before and after a three-month period, Britt Wray conducted interviews with the experts to see how the diary process affected them:

"One of the key findings in the data which the participants' diaries generated is that the science communication produced during the experiment was directly shaped by the affects and emotions that emerged while contributing to AURATOR. This was, for instance, expressed by the ways in which they all grappled with their own roles as communicating experts in the AURATOR: Some were concerned that their reputation among colleagues might suffer from their participation while others actively used the diaries as a therapeutic space where they were allowed to articulate and discuss crazy ideas. One participant directly attributes the diary method as the origin point for three new projects—one of which was a DIY CRISPR kit for amateurs that has become world-renowned," Wray says.

Breaking the mold of the science narrative

Wray emphasizes that she is not suggesting that all science communication should be conducted in a similarly experimental fashion, but that universities should at least consider breaking the mold of the traditional science narrative that tends to alienate people rather than engage them: