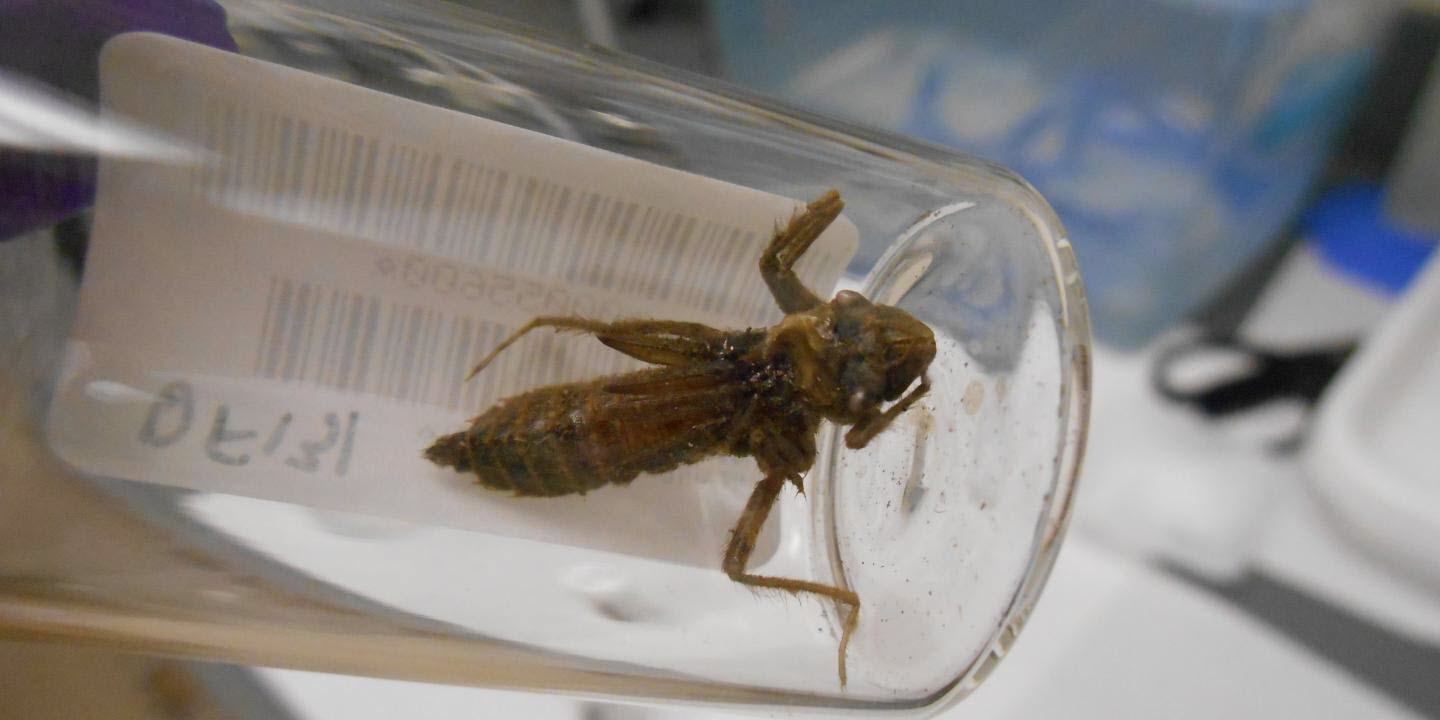 HANOVER, NH — July 22, 2020 — A citizen science program that began over a decade ago has confirmed the use of dragonflies to measure mercury pollution, according to a study in Environmental Science & Technology.

The national research effort, which grew from a regional project to collect dragonfly larvae, found that the young form of the insect predator can be used as a "biosentinel" to indicate the amount of mercury that is present in fish, amphibians, and birds.

The finding will make it easier to conduct mercury research and could lead to a national registry of pollution data on the toxic metal.

"Researchers needed a proxy for fish since that is what people and animals eat," said Celia Chen, director of Dartmouth College's Toxic Metals Superfund Research Program and a co-author of the study. "Fish can be hard to work with for a national-level research program, so it's helpful to be able to focus our research on dragonfly larvae."

Dragonflies occupy diverse freshwater habitats across six continents and have tissues that take up mercury in its toxic form. As predators, dragonflies operate in the food web in a manner that is similar to fish, birds, and amphibians that also accumulate mercury in their body tissues.

The study includes data from thousands of larval dragonfly specimens collected from nearly 500 locations across 100 sites within the US National Park System. The survey was collected from 2009 through 2018 as part of the national Dragonfly Mercury Project.

"The support of citizen scientists around the country created the opportunity for this study to have such significance. This is a terrific example of how public outreach around science can bring results that help the entire country," said Chen.

Methylmercury, the organic form of the toxic metal mercury, poses risks to humans and wildlife through the consumption of fish. Mercury pollution comes from power plants, mining and other industrial sites. It is transported in the atmosphere and then deposited in the natural environment, where wildlife can be exposed to it.

Fish and aquatic birds are commonly used to monitor mercury levels but are difficult to work with in a large-scale project because of their size, migratory patterns, and the diversity of species. Dragonfly larvae are easy to collect and make the citizen science research project possible.

"It is extremely rewarding to assist teachers and their students to engage in data-driven, real-world research impacting their communities. I see a lot of enthusiasm from students eager to take part in 'real' science," said Kate Buckman, a research scientist who serves as Dartmouth's coordinator for the citizen science program.

As part of the decade-long study, researchers came up with the first-ever survey of mercury pollution in the US National Park System. The research found that about two-thirds of the aquatic sites studied within the national parks are polluted with moderate-to-extreme levels of mercury.

The finding of mercury within park sites is not an indicator that the source of pollution is in the parks themselves. Mercury is distributed widely within the atmosphere and is deposited in the protected areas as it is in other water bodies across the country.

Given that the parks studied stretch across the entire US, including Alaska and Hawaii, the findings reflect levels of mercury throughout the country.

"To date, we have not conducted such a broad scale survey on mercury in the US. The beauty of the dragonfly data set is that it is national, covers a huge area with different systems, and has the potential to create a national baseline of mercury pollution information," said Chen.

The study also found that faster moving bodies of water, such as rivers and streams, featured more mercury pollution than slower moving systems including lakes, ponds, and wetlands.

According to the paper: "Collectively, this continental-scale study demonstrates the utility of dragonfly larvae for estimating the potential mercury risk to fish and wildlife in aquatic ecosystems and provides a framework for engaging citizen science as a component of landscape [mercury] monitoring programs."

The original project was launched by Dr. Sarah Nelson at the University of Maine and the Schoodic Institute in 2007. Dartmouth's Toxic Metals Superfund Research Program developed a regional effort in New Hampshire and Vermont in 2010. The project was expanded nationally by the National Park Service and the US Geological Survey.

The citizen science project in the Upper Valley region of New England typically runs in the fall with participation from high school students in New Hampshire and Vermont.

- This press release was originally published on the Dartmouth website