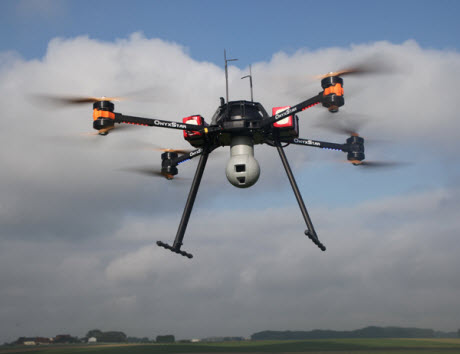 Unmanned drones have proliferated in recent years because they can traverse difficult terrain, reduce labor costs and replace fleets of vehicles.Photo credit: ZullyC3P, Wikimedia CommonsUsing unmanned drones to deliver vaccines in low- and middle-income countries may save money and improve vaccination rates, new research led by the Johns Hopkins Bloomberg School of Public Health and the Pittsburgh Supercomputing Center suggests.

The cost savings would come from drones being able to deliver vaccines more quickly and cheaply than land-based methods limited by road conditions and the need for costly fuel and maintenance, the researchers note in their study, published June 20 in the journal Vaccine.

“Many low- and middle-income countries are struggling to get lifesaving vaccines to people to keep them from getting sick or dying from preventable diseases,” says senior author Bruce Y. Lee, MD, MBA, an associate professor at the Bloomberg School and director of operations research at its International Vaccine Access Center. “You make all these vaccines but they’re of no value if we don’t get them to the people who need them. So there is an urgent need to find new, cost-effective ways to do this.”

In low- and middle-income countries, there are many challenges faced by immunization programs, which provide childhood vaccines such as hepatitis B, tetanus, measles, and rotavirus, and will be utilized in the future as vaccines for dengue, malaria, and Zika are developed and brought to market. After entering a country, vaccine vials typically travel by road through two to four storage locations before arriving at clinics where health workers administer doses to patients. Most vaccines need to remain refrigerated until they are used or they will spoil. Non-vaccine costs of routine immunizations are expected to rise by 80 percent between 2010 and 2020, with more than one-third of costs attributable to supply chain logistics. Supply chain inefficiencies can mean that many vaccines don’t even reach the people who need them.

Meanwhile, unmanned drones have proliferated in recent years because they can traverse difficult terrain, reduce labor costs, and replace fleets of vehicles. They have been used for surveillance and in humanitarian aid delivery and are now being developed to transport medical samples and supplies, though previously little has been known whether this is a cost-effective use of the new technology.

For their study, Lee and his colleagues created a HERMES computer model to simulate a traditional land-based transportation system—a combination of trucks, motorbikes and public transit—and compared it with an unmanned drone system for delivering vaccines as part of an immunization program. Seattle-based non-governmental organization Village Reach helped provide data for the model. They varied characteristics such as geography, population, road conditions, and vaccine schedule in order to assess which conditions would most contribute to drones offering the biggest cost savings.

They found that using drones to get vaccines to the last stop on their journey—vaccination locations—could slightly improve vaccine availability—potentially immunizing 96 percent of the target population as compared to 94 percent using land-based transport—while producing significant savings: eight cents for every dose administered (roughly a 20 percent savings). To save money, the drones would need to carry at least .4 liters of vaccines and the researchers say that the drones could carry at least 1.5 liters. If there were no flight delays for scheduled drone deliveries and the drones carried 1.5 liters, the researchers noted, each flight could cost up to $8.93 and annual infrastructure and overhead costs could cost up to $60,000 and still produce savings. As a comparison, the researchers studied the traditional land-based immunization system in Mozambique, which has achieved 94 percent vaccine coverage, but they note that many countries currently cover fewer than 60 percent of the population using land-based approaches.

“Currently, in many locations, vehicles that transport vaccines aren’t always available or reliable,” Lee says. “Assuming that drones are reliable, are capable of making the necessary trips and have properly trained operators, they could be a less expensive means of transporting vaccines, especially in remote areas. They could be particularly valuable when there is more demand for certain vaccines than anticipated and immunization locations must place urgent orders.”

While the computer models are good at theoretically analyzing the cost effectiveness of drone technology, the researchers say that real-world testing must be done to make certain that drones are a viable way to transport vaccines. And many obstacles may exist. Regulatory issues could limit the ability of drones to deliver goods and commodities. Maintaining and operating the equipment would require specialized tools and skills that may be difficult to access in these developing countries. Since no person would accompany a shipment, greater coordination would be needed between those shipping and those receiving the vaccines. Appropriate packing to maintain vaccine quality would need to be developed.

Drones are currently being tested for medical supply deliveries in rural Virginia, Bhutan, and Papua New Guinea. UNICEF is testing the feasibility of using them to transport lab samples in Malawi. And in Tanzania, there are efforts afoot to transport blood and essential medications.

The research was supported by the Bill and Melinda Gates Foundation, the Agency for Healthcare Research and Quality (RO1HS023317), and the Eunice Kennedy Shriver National Institute of Child Health and Human Development (UO1HD086861 and U54HD070725).