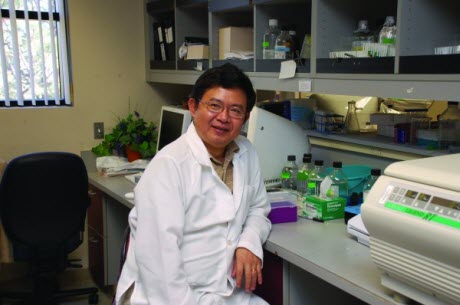 Xaio-kun Zhang, PhD, is an adjunct professor at Sanford Burnham Prebys Medical Discovery Institute. Dr. Zhang studies how vitamin A and its analogs treat and prevent various cancers.Photo courtesy of Sanford Burnham Prebys Medical Discovery Institute Newswise — La Jolla, Calif. – Researchers at Sanford Burnham Prebys Medical Discovery Institute (SBP) have published a study in Nature Communications shedding new light on how K-80003 (TX803), an anti-cancer agent discovered at the Institute, prevents activation of the PI3K pathway, resulting in inhibition of cancer cell growth. Because the PI3K pathway is common to many cancers, K-80003 could have broad therapeutic applications. Tarrex Biopharma, Inc. has licensed the compound and announced they will soon begin Phase 1 clinical trials at the Dana Farber Cancer Center for patients with colorectal cancer.

“K-80003 binds specifically to a truncated form of the retinoid X receptor-alpha (tRXRα) protein that promotes tumors,” says Xaio-kun Zhang, PhD, adjunct professor and senior author of the paper. “When it binds tRXRα, it freezes the protein into an inactive (tetrameric) configuration that prevents it from stimulating the PI3K pathway.

“A major goal of this study was to dig deeper and find out why this compound is so effective, and appears to have so few side effects,” adds Zhang. “We wanted to visualize how tRXRα and K-80003 physically interact—at atomic resolution—in a way that makes this such a promising cancer drug.”

Working with the lab of Robert Liddington, PhD, professor at SBP, the research team used X-ray crystallography to find that six molecules of K-80003 bound to the tetramer interfaces.

“Our findings show that K-80003 creates a configuration that locks the tetramer into a tight ball, hiding all of its binding sites so it can’t trigger the PI3K pathway,” explains Liddington.

“We know tRXRα protein is specifically produced by tumor cells, while normal cells only produce full-length RXRα protein. Taken together, our findings explain the drug’s potency and specificity for cancer cells and why the compound has such low toxicity,” adds Zhang.

Because RXRα is a nuclear receptor, it has the ability to control gene expression. The mutation that creates tRXRα puts the protein into overdrive, activating PI3K in the cytoplasm and accelerating tumor growth. K-80003 acts like a Denver Boot, clamping down on tRXRα and eliminating these hyperactive growth signals. In addition, K-80003 often brings tRXRα back to the nucleus, which may further impair its function and enhance the drug’s therapeutic impact.

But that was not the end of the discovery. The team also found an LxxLL motif (a common sequence of amino acids) in the p85α protein, which acts as an intermediary between RXRα and PI3K. Identifying LxxLL sheds new light on how tRXRα binds to the cytoplasmic p85α protein and activates PI3K. When tRXRα becomes a tetramer, p85α can no longer bind to it.

These findings also help illustrate how nuclear receptors can function outside the nucleus, and how changes in both conformation and location can dramatically alter their function. In the long-term, understanding these mechanisms could lead to a variety of new therapies. But right now, this research shows why K-80003 has so much potential.

“The tRXRα protein is produced in almost all cancers,” said Zhang, “so the compound could be very effective for many different types, such as breast, liver, and colon.”