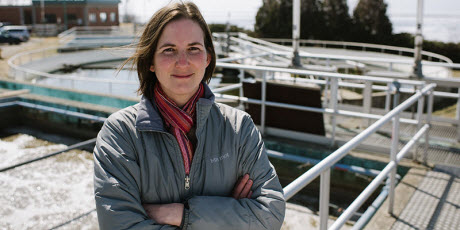 Professor Christine Vatovec follows the flow from pharmacy to here: the Burlington wastewater treatment plant. Her latest study on prescription drugs in the water is part of her boundary-bending research that explores the connections between environmental well-being and human health.Photo credit: Andy DubackWith nearly sixty percent of American adults now taking prescription medications—from antidepressants to cholesterol treatments—there is growing concern about how many drugs are flowing through wastewater treatment facilities and into rivers and lakes. Research confirms that pharmaceutical pollution can cause damage to fish and other ecological problems—and may pose risks to human health too.

Scientists have assumed that people flushing their unused medications down the drain or toilet was a major source of these drugs in the water.

But a new first-of-its-kind study tells a different story.

“Less than one percent of students we surveyed report flushing any drugs down the drain in the last year,” says University of Vermont scientist Christine Vatovec. And what she and her colleagues found in the water backs up the students’ self-reporting.

Related Article: What Happens to Pharmaceuticals in the Digestive System of a Bird?

Concentrations of caffeine and nicotine decreased slightly after the students left (no surprise), but there was no data suggesting that students were flushing their unwanted medications. Many students reported having leftover prescription meds, but only a small portion of them disposed of these drugs, mainly in the trash.

“This contradicts the common assumption that down-the-drain disposal is an important source of pharmaceuticals to the wastewater stream in the environment,” the team writes in their study, published August 29 in the journal Science of the Total Environment.

“Our study is the first time that scientists have correlated data about how people are purchasing, using and disposing of their pharmaceuticals with data on what's actually coming down the pipe,” Vatovec says. Several surveys in recent decades indicated that a majority of Americans flush unfinished or unwanted medications. But the new study found a very different result in its survey of more than 300 students. “Flushing does not appear to be an important source,” says Patrick Phillips, a hydrologist with the US Geological Survey who co-led the new study. “I was surprised.”

The scientists did detect a rise in allergy medications in the water that correlated to a rise in seasonal pollen. They also saw a relative rise in drugs used by older people—like diabetes and heart medications—after the younger people moved out.

Current advice encourages people to take unneeded medications to drop-off days at police stations and pharmacies so they can be incinerated, and almost none of the students indicated that they were in the habit of tossing unwanted meds down the drain. However, some people who were, in earlier decades, encouraged to flush may still be doing that. “So we have more to learn about other parts of the population,” Vatovec says, but education efforts with students may not be the best investment since excretion and other sources of drugs, like pharmaceutical manufacturing, appear to be much more important sources of drugs in wastewater.

Vatovec—who holds a joint faculty appointment in UVM's Rubenstein School of Environment and Natural Resources and the College of Medicine—is quick to note that there is no evidence that the extremely low concentrations of pharmaceuticals found in their survey and other similar studies pose any direct risk to human health.

“These results should not make people nervous about swimming or drinking water,” she says, “because, to the best of scientific knowledge we have available right now, the concentrations are so low that you’d need to drink about the football field’s worth of lake water to get an actual dose of any one individual pharmaceutical.” And the team’s results in Burlington for Lake Champlain are not unusual. “Pharmaceuticals are found in about eighty percent of the surface waters tested in the United States,” Vatovec says.

Related Article: Are Fish Getting High on Cocaine?

Which is one reason why she is eager to see the development of practices to help people manage their health with fewer medications—and to see the development of “green pharmacy” drugs that fully break down in the body. “We know these drugs in our surface waters can create ecological problems and there are more and more of them,” she says. Though there is no evidence yet that human health is threatened by pharmaceutical pollution, “there are many unanswered questions,” she says.

In Burlington, Vermont, Vatovec co-led a team of five scientists from the University of Vermont and the United States Geological Survey who sampled wastewater outflow for ten days during the spring when students from UVM and Champlain College were moving out. They detected fifty-one pharmaceuticals pouring into Lake Champlain—and they expected to see a spike in concentrations of some of these drugs as students dumped unused meds down the drain while they were departing their dorm rooms and apartments. But they didn’t see it.