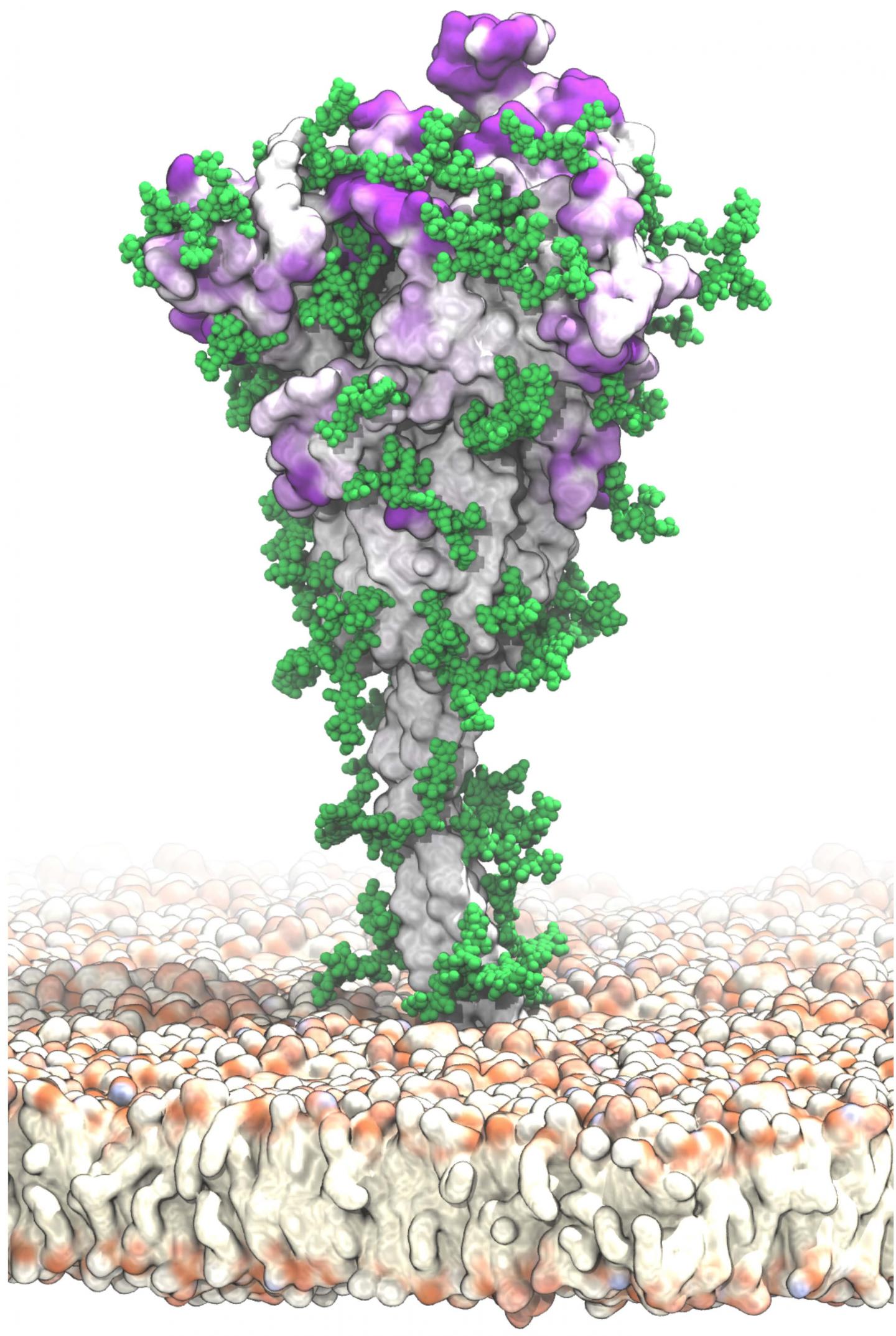 In this visualization of antibody target sites, the SARS-CoV-2 spike protein is tethered to the viral membrane with a slender stalk. Patches of intense purple color at the surface of spike indicate potential target sites for antibodies that are not protected by the glycans—chains of sugar molecules—shown in green. These binding sites and their accessibility were identified with molecular dynamics simulations that capture the complete structure of the spike protein and its motions in a realistic environment.
Mateusz Sikora, Sören von Bülow, Florian E. C. Blanc, Michael Gecht, Roberto Covino, and Gerhard Hummer (CC-BY 4.0, https://creativecommons.org/licenses/by/4.0/)

A new, detailed model of the surface of the SARS-CoV-2 spike protein reveals previously unknown vulnerabilities that could inform development of vaccines. Mateusz Sikora of the Max Planck Institute of Biophysics in Frankfurt, Germany, and colleagues present these findings in the open-access journal PLOS Computational Biology.

To support vaccine development, Sikora and colleagues aimed to identify novel potential target sites on the surface of the spike protein. To do so, they developed molecular dynamics simulations that capture the complete structure of the spike protein and its motions in a realistic environment.

These simulations show that glycans on the spike protein act as a dynamic shield that helps the virus evade the human immune system. Similar to car windshield wipers, the glycans cover nearly the entire spike surface by flopping back and forth, even though their coverage is minimal at any given instant.

By combining the dynamic spike protein simulations with bioinformatic analysis, the researchers identified spots on the surface of the spike proteins that are least protected by the glycan shields. Some of the detected sites have been identified in previous research, but some are novel. The vulnerability of many of these novel sites was confirmed by other research groups in subsequent lab experiments.

"We are in a phase of the pandemic driven by the emergence of new variants of SARS-CoV-2, with mutations concentrated in particular in the spike protein," Sikora says. "Our approach can support the design of vaccines and therapeutic antibodies, especially when established methods struggle."

The method developed for this study could also be applied to identify potential vulnerabilities of other viral proteins.

- This press release was supplied by PLOS. It has been edited for style