Within hours of birth, a baby’s gaze is drawn to faces. Now, brain scans of newborns reveal the neurobiology underlying this behavior, showing that as young as six days a baby’s brain appears hardwired for the specialized tasks of seeing faces and seeing places.

The Proceedings of the National Academy of Sciences (PNAS) published the findings by psychologists at Emory University. Their work provides the earliest peek yet into the visual cortex of newborns, using harmless functional magnetic resonance imaging (fMRI).

“We’re investigating a fundamental question of where knowledge comes from by homing in on ‘nature versus nature,’” says Daniel Dilks, associate professor of psychology, and senior author of the study. “What do we come into the world with and what do we gain by experience?”

“We’ve shown that a baby’s brain is more adult-like than many people might assume,” adds Frederik Kamps, who led the study as a PhD candidate at Emory. “Much of the scaffolding for the human visual cortex is already in place, along with the patterns of brain activity, although the patterns are not as strong compared to those of adults.”

Kamps has since graduated from Emory and is now a post-doctoral fellow at MIT.

Understanding how an infant’s brain is typically organized may help answer questions when something goes awry, Dilks says. “For example, if the face network in a newborn’s visual cortex was not well-connected, that might be a biomarker for disorders associated with an aversion to eye contact. By diagnosing the problem earlier, we could intervene earlier and take advantage of the incredible malleability of the infant brain.” 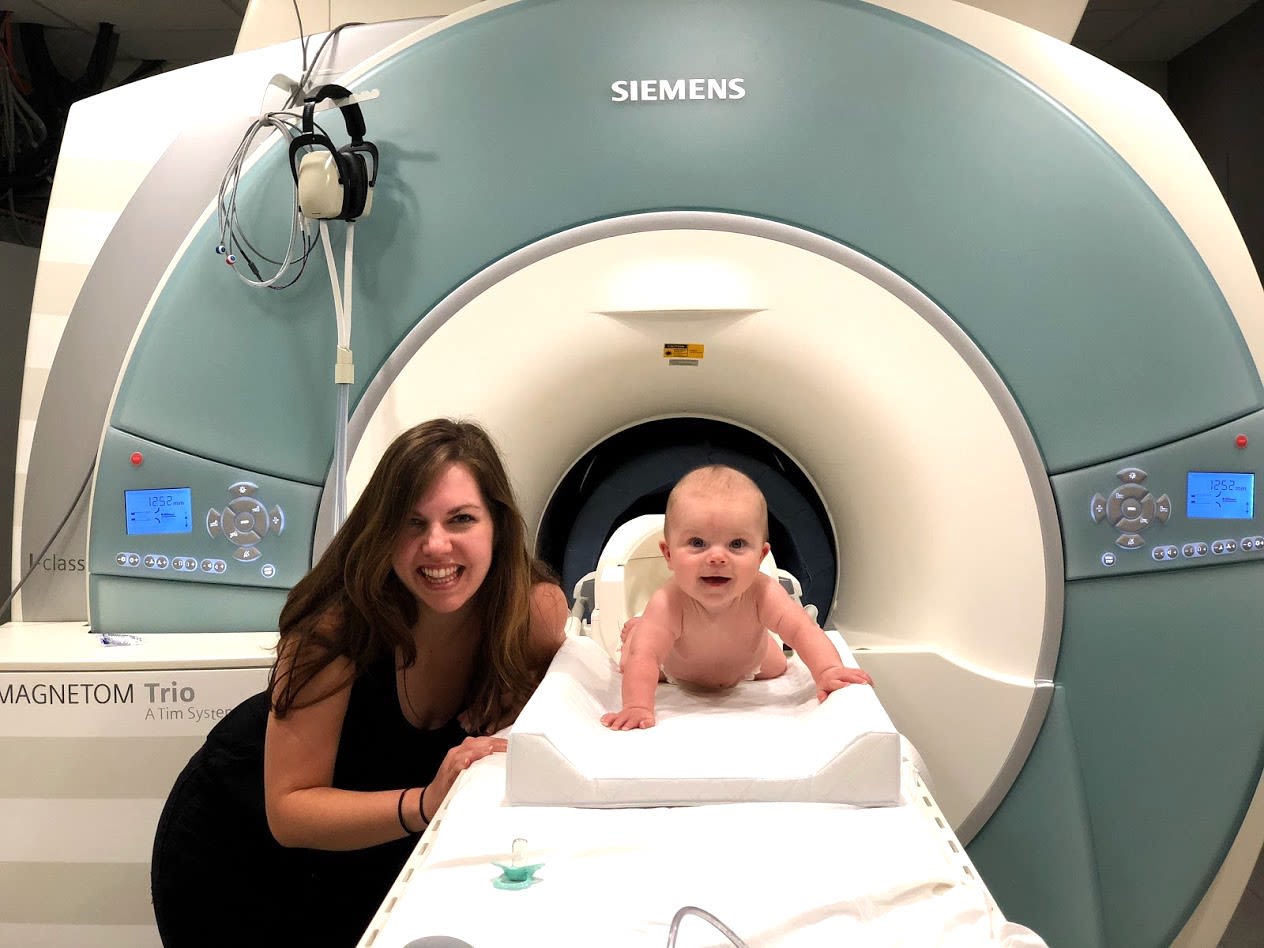 For decades, scientists have known that the adult visual cortex contains two regions that work in concert to process faces and another two regions that work together to process places. More recent work shows that the visual cortex of young children is differentiated into these face and place networks. And in a 2017 paper, Dilks and colleagues found that this neural differentiation is in place in babies as young as four months.

For the current PNAS paper, the average age of the newborn participants was 27 days. “We needed to get closer to the date of birth in order to better understand if we are born with this differentiation in our brains or if it’s molded by experience,” Dilks says.

His lab is a leader in adapting fMRI technology to make it baby friendly. The noninvasive technology uses a giant magnet to scan the body and record the magnetic properties in blood. It can measure heightened blood flow to a brain region, indicating that region is more active.

Thirty infants, ranging in age from six days to 57 days, participated in the experiments while sleeping. During scanning, they were wrapped in an inflatable “super swaddler,” a papoose-like device that serves as a stabilizer while also making the baby feel secure.

“Getting fMRI data from a newborn is a new frontier in neuroimaging,” Kamps says. “The scanner is like a giant camera and you need the participant’s head to be still in order to get high quality images. A baby that is asleep is a baby that’s willing to lie still.”

To serve as controls, 24 adults were scanned in a resting state — awake but not stimulated by anything in particular.

The scanner captured intrinsic fluctuations of the brain for both the infants and adults.

The results showed the two regions of the visual cortex associated with face processing fired in sync in the infants, as did the two networks associated with places. The infant patterns were similar to those of the adult participants, although not quite as strong. “That finding suggest that there is room for these networks to keep getting fine-tuned as infants mature into adulthood,” Kamps says.

“We can see that the face networks and the place networks of the brain are hooked up and talking to each other within days of birth,” Dilks says. “They are essentially awaiting the relevant information. The next questions to ask are how and when these two functions become fully developed.”

Co-authors of the study include Cassandra Hendrix, an Emory graduate student, and Patricia Brennan, professor and chair of psychology at Emory.

- This press release was originally posted on the Emory University website. Story and design by Carol Clark.