Video credit: University of Pittsburgh School of Medicine
PITTSBURGH – Researchers at the University of Pittsburgh School of Medicine and the University of Toronto have uncovered the first molecular steps that lead to immune system activation and eventual rejection of a transplanted organ. The findings, published June 23 in Science Immunology, may be used someday to create better donor-recipient matches and develop new ways to prevent rejection of transplanted tissues.
Approximately 50 percent of all transplanted organs are rejected within 10 to 12 years, so there is a great need for better ways to reduce or eliminate organ rejection, explained the study’s co-senior author Fadi Lakkis, MD, Frank & Athena Sarris Chair in Transplantation Biology and scientific director of Pitt’s Thomas E. Starzl Transplantation Institute (STI).
“For the first time, we have an insight into the earliest steps that start the rejection response,” Lakkis said. “Interrupting this first recognition of foreign tissues by the innate immune system would disrupt the rejection process at its earliest inception stage and could prevent the transplant from failing.”
UPMC has been a worldwide leader in organ transplantation for more than 35 years. Throughout its history, the University of Pittsburgh Transplantation Institute, renamed the STI in 1996 in honor of liver transplant pioneer Dr. Thomas E. Starzl, has been creating innovative transplantation strategies. 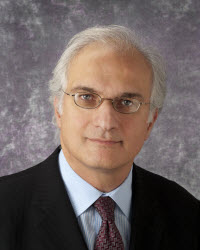 Fadi Lakkis, MDPhoto courtesy of the University of Pittsburgh School of Medicine“This study is the latest example of the STI’s commitment to improving the lives of patients with organ failure,” Lakkis said.
The immune system is composed of innate and adaptive branches. The innate immune system is the first to detect foreign cells in the body and is required to activate the adaptive, or acquired, immune system. The mechanisms underlying this second phase of immune activation following organ transplantation are well studied, but the details of how innate immunity contributes to rejection have, until now, remained unknown.
In the new study, researchers used a classical genetic mapping approach to show that in mice a molecule called SIRP-alpha leads to innate immune system activation and differs between unrelated individuals. When the transplanted tissue SIRP-alpha is different from the host tissue SIRP-alpha, the transplant SIRP-alpha binds to a receptor called CD47 that is located on the recipient’s monocytes, a class of innate immune cells. This binding kicks off a series of cellular events that activate the innate and then eventually the adaptive immune system.
Like mice, humans also express SIRP-alpha, so sequencing the gene to identify donors and recipients with matched forms of the molecule hopefully will lead to lower organ rejection rates in the future, Lakkis said.
Blocking the interaction between SIRP-alpha and CD47 in mice prevented the monocyte activation, suggesting that disruption of this coupling could prevent recipient immune system activation. Future studies to examine how the interaction between SIRP-alpha and CD47 leads to monocyte activation could lead to new ways to prevent organ rejection.
Additional authors on the study were co-senior author Jayne Danska, PhD, of the Hospital for Sick Children and University of Toronto; Hehua Dai, MD, Andrew Friday, PhD, Khodor Abou-Daya, MD, Amanda Williams, MS, Matthew Nicotra, PhD, David Rothstein, MD, Warren Shlomchik, MD, Jeffrey Isenberg, PhD, and Martin Oberbarnscheidt, MD, PhD, all of Pitt; Steven Mortin-Toth of the Hospital for Sick Children; and Takashi Matozaki, MD, PhD, of Kobe University.
Funding was provided by National Institutes of Health grants AI099465 and AI049466, the American Heart Association, the Canadian Institutes of Health Research and the Natural Sciences & Engineering Research Council of Canada.