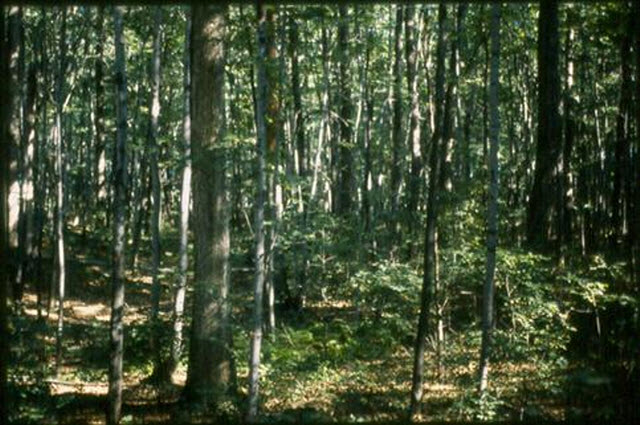 Over thousands of years, most forests in the eastern United States evolved with frequent fire—which promoted tree species and ecosystems that were both fire and drought resistant. In little more than a century, humans upset that balance suggest researchers who blame the change—in part—on the well-meaning efforts of Smokey Bear.

Since the 1930s, the composition of forests in the region has changed markedly—according to Marc Abrams—professor of forest ecology and physiology at Penn State. Drought-sensitive, fire-intolerant tree species—such as maple, birch and hemlock—have become more prominent, and drought-resistant, fire-adapted species—such as oak, hickory and pine have declined.

"Eastern forests are changing in a way that we haven't seen for thousands of years, and this is basically because they have gone through major changes in disturbance regimes and land-use history," Abrams said. "The change to less drought resistance—part of a process known as mesophication—has serious implications in a warming climate, which portends more frequent and more severe droughts."

The trend toward less drought resistance in Eastern forests began about 140 years ago with the advent of clear cutting to build and fuel a rapidly industrializing society. This was followed by catastrophic fires that burned most of the trees that remained on the region's landscape. Forests began to regrow as before—but in the 1940s the Smokey Bear fire suppression regime began.

As a result—in the 70 years or so since—with forest fire largely suppressed by firefighting crews and no longer a significant factor in ecosystem adaptation—Eastern forests have become more vulnerable to drought.

"Our forests are in a state of flux from these two very contrasting land-use history events," Abrams said. "We had a lot of fire on the landscape during the time of Native American occupation and also during early European settlement and the associated clear-cut era—so we went from a moderate to large amount of fire to an era of overprotection. With Smokey Bear, we have lost fire, and we need to get it back. This issue is on the radar screen of foresters."

Abrams collaborated with Gregory Nowacki of the Eastern Regional Office of the U.S. Forest Service on the study, which was published this month in the journal Tree Physiology. The researchers categorized tree species according to drought tolerance and adaptation to fire. Considering factors such as tree species longevity, temperature preference, and shade tolerance—they examined the relationship between forest composition trends and land-use patterns—disturbance events and historical weather records.

Researchers analyzed historical human impacts and land-use legacy by merging the fields of tree physiology and forest ecology—an approach Abrams said grew from a realization that the distribution and dominance of each tree species corresponds to an ecophysiological expression. He noted that long-term change in forest ecosystems is directly relatable to the underlying physiological attributes of component tree species. This kind of analysis provides a robust assessment of the role and impacts of the most important drivers of forest dynamics—namely climate change and land-use history—Abrams added. This method reveals ecophysiological changes at the forest-type and forest-biome level that come from consideration of extensive and long-term forest survey records—some dating to the precolonial period.

From the time of European settlement to the present, forests in the eastern United States experienced major compositional changes—including a large overall decline in conifers—such as pine, hemlock, and larch, expansions of disturbance-oriented aspen and oak species in former conifer-northern hardwoods or subboreal forests—and a nearly ubiquitous increase in fire-sensitive—shade-tolerant maple across all regions. "The results of our research indicate that vegetation changes since European settlement in the eastern United States are caused to a greater extent by anthropogenic alteration of disturbance regimes—clearing for agriculture, wood harvesting, introduction of nonnative pests and diseases, and fire suppression—than by climate change," Abrams said. Indeed, land-use practices can mediate changes in forest composition that run counter to climate trends.

"What is particularly fascinating about our study is that while forests have changed primarily as a result of altered land-use history, they are changing in a way that likely will make them more vulnerable to future climate change, including drought."

The paper is available online at http://treephys.oxfordjournals.org/content/early/2016/03/03/treephys.tpw005.full.pdf+html